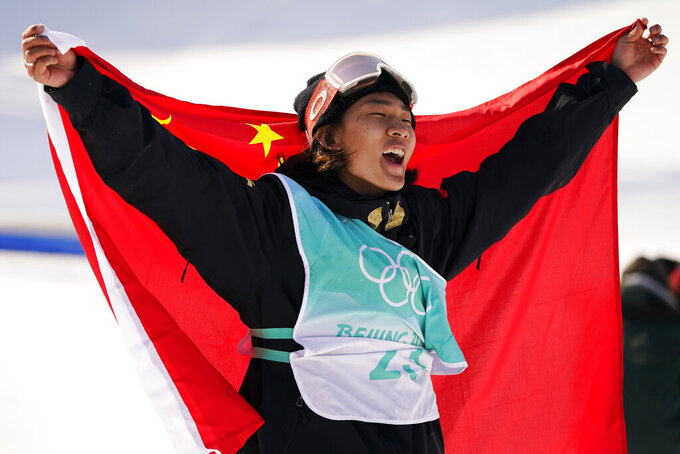 The host country built one for them, and they delivered.

Su blew away his competition so thoroughly that he was able to take a casual victory lap on his final jump. He held his hands on his head amid an ovation from a roughly half-capacity crowd at Big Air Shougang — as many as were allowed to squeeze into the venue amid coronavirus restrictions.

Moments after taking his place atop the podium, Su spotted his parents in the stands and began to cry.

He hadn't seen his mom and dad in seven months while training in Europe and competing around the world. He spoke to them through a fence separating those allowed inside Beijing's Olympic bubble from the fans.

“I was thinking back to when I was 4 years old and my first time snowboarding,” he said in English. “I'm so appreciative. This moment is so special for my family.”

Three days shy of his 18th birthday, Su started the competition with consecutive 1800s — five spins — first completing the trick going forward, then backward. He led by 17.5 points entering the final heat, and nobody got close in Round 3.

Slopestyle gold medalist Max Parrot of Canada and Japanese rider Takeru Otsuka each landed one higher-scoring trick than Su in the first two rounds, but neither paired it with a second big jump in the three-round competition.

Mons Roisland of Norway was the last competitor with a realistic chance of catching Su. He played it safe with a 1620, locking up the silver, and setting up Su's victory lap. Parrot earned bronze.

Su, an aspiring actor who landed a part in an action film, “The Taking of Tiger Mountain,” has made a shocking surge to the forefront of competitive snowboarding.

He's spent the Beijing Games gushing about other riders who he has mostly watched from afar, including Parrot, who became the eighth snowboarder with a record three Olympic medals.

“Two years ago, I didn’t even know him,” Parrot said. “After the podium, we had a quick talk, and he told me I was one of his idols, and he has been looking up to me this past year. He said because of me, he has been pushing really hard.

“So I told him, now you are going to make me push really hard.”

Su began working with Japanese coach Yasuhiro Sato when he was 14 with an eye on the Beijing Games, and he's suddenly become a force. He won in just his third World Cup competition in Colorado in December, becoming the first Chinese rider with a medal on that circuit.

“Coach Sato is actually a coach that changed my life,” Su said via interpreter. “The knowledge and the tricks he has taught me, I totally understand and absorbed them.”

Su proved that with his slopestyle silver, a medal that would have gone gold if judges had noticed Parrot missed a grab on his first jump. It was the first of several scoring mishaps at snowboarding events in the Beijing Games, spurring an outpouring of frustration from the field.

There was no judging drama Tuesday. Su's lead after two rounds was so commanding that competitors played it safe on their third jumps, jockeying instead to simply crack the podium.

Su was plotting to drop a 1980 in his final run. He was happy to keep it in his back pocket when it wasn't necessary.

“When that moment actually arrived, I was so excited,” he said via interpreter. “In that moment, I wanted to enjoy it and take it all in.”

China has six medals in snowboarding and freestyle skiing in Beijing, trailing only the United States and Canada with eight. Su and Gu have combined for four of those, and Gu could still win another in the halfpipe.

The host nation turned heads when it converted much of the former Shougang Group steel mill into a winter sports complex, complete with the world's only permanent big air venue.

Skiers and snowboarders soaring past dormant cooling towers may be remembered around the world as a defining image from the Beijing Games.

In China, it's now the spot of two memorable Olympic triumphs, too.