Super Bowl on the minds of Olympic competitors in China 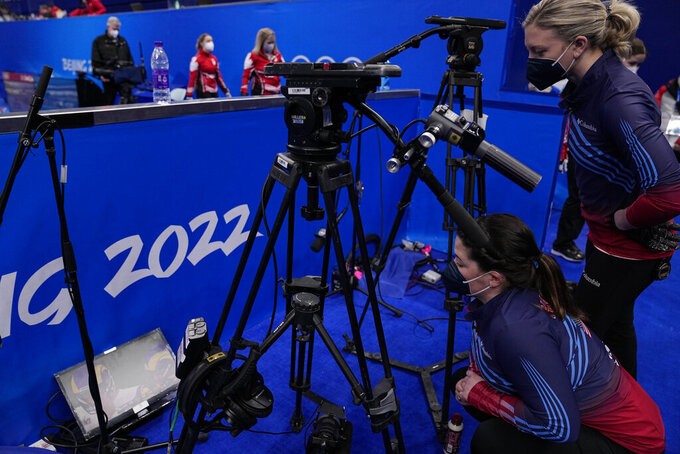 BEIJING (AP) — A well-timed postponement allowed Nick Goepper to watch his beloved Cincinnati Bengals in the Super Bowl without worrying that it might distract him from qualifying in freestyle skiing at the Beijing Olympics.

Not that it was all that easy to catch the game.

For the first time, the Winter Olympics and the Super Bowl took place at the same time. That created a big day for NBC, which televised both, but it also sent athletes in China scrambling to find ways to watch. The time change meant the game took place Monday morning in China at the Olympics.

Goepper had been worried about whether he should watch the game so soon before qualifying, but bad weather pushed several events back, so his slopestyle qualifying wasn't until Tuesday. He only had practice Monday.

“I’m a little bummed,” Goepper said. “I won’t say that it affected my day too much.”

While Goepper still has more competition at the Beijing Games, snowboarder Chloe Kim already won gold in the halfpipe and was able to head back to the United States for the game. She posted pictures from it on social media. Kim is a native of Long Beach, California, near Los Angeles.

Snowboarder Shaun White said after his final Olympic halfpipe competition that he was heading to the Super Bowl as well. The U.S. Ski & Snowboard Team posted a picture of him at the game.

The athletes still at the Olympics didn't have that luxury. American curler Tara Peterson, whose team beat South Korea on Monday morning, said after the match she didn't know who won the Super Bowl. She asked what happened.

Peterson said family back home had two screens — for watching curling and football at the same time.

Men’s snowboarders were able to catch the entire game before qualifying for big air started at 1:30 p.m. American Dusty Henricksen said most of his teammates were up before the sun to ensure they saw the opening kick.

The men were due at Big Air Shougang at 10:45 a.m., and they had the broadcast running on a couple of smartphones starting in the Olympic Village and then at the venue.

The women had an arrival time of 6:45 a.m. for their 9:30 qualifying, so watching wasn’t an option. A few of them did catch the halftime show on a TV between jumps.

Members of the media were also finding ways to watch. A big “Woah!” went up in the photographers room at Wukesong Sports Centre as the Bengals failed to convert fourth-and-1 near the end of the game — not long before the women's hockey semifinal game between Canada and Switzerland began.

One American photographer explained to a foreign colleague how the game was over because Cincinnati had just one timeout remaining. About seven people were gathered around watching on a photographer’s computer.

As for Goepper, he still has high hopes for the Bengals.

“They’ve been one of those underdog teams, they’ve just been doing a lot of this shuffling and trying to figure things out,” he said. “This new generation of young guys, their coach and QB and stuff, it’s a new face and looking good for the future.”

Maybe he'll even try to represent his team Tuesday.

“I was thinking of throwing on a couple stripes for tomorrow,” he said. “If I can find some orange and black tape or something.”