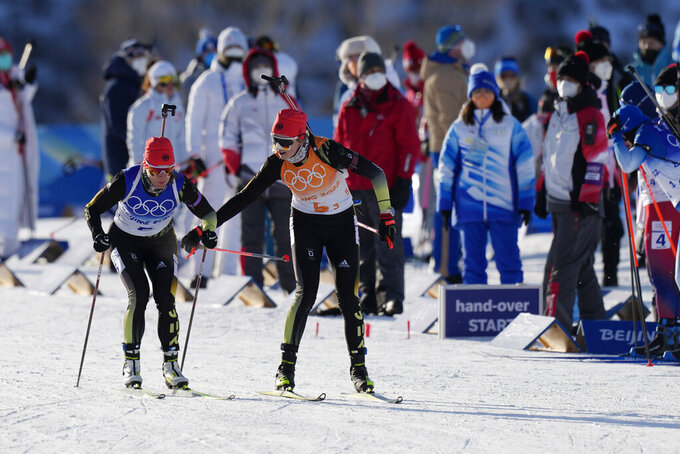 ZHANGJIAKOU, China (AP) — Elvira Oeberg skied out front, right where she wanted be, and stayed out front all the way to an Olympic gold medal.

Oeberg anchored the Swedish team to victory in the four-woman biathlon relay on Wednesday, skiing fast and shooting clean to win her third medal of the Beijing Games. Oeberg, who also won silver in the sprint and pursuit races in her Olympic debut, put the Swedes across the line 1 hour, 11 minutes, 3.9 seconds.

“It’s a special place to be in, in the front of an Olympic relay in the final leg," Oeberg said. "They couldn’t have given me a better starting position so I really tried today to focus on my own race and just do like I normally do in a sprint, for example, just do my thing.

"I’m really, really proud that I managed to keep it together.”

Russian biathlete Uliana Nigmatullina trailed Oeberg by about 24 seconds after the final shooting range and ended up finishing 12 seconds behind for silver in the 4x6-kilometer race.

“There is a big difference whether you ski the fourth leg or the first leg when you get the medal,” Nigmatullina said. "You feel it a lot more when you finish a race, and maybe because of this the girls still find it hard to realize what happened and feel it. I already felt it and it is the peak of happiness.”

“It is a very important medal for us because each of us truly did the maximum over the whole season, over the whole year," she said. "It was a very long and hard journey to get to this point so now there is this calmness in my soul because I can say that it was not all in vain.”

The Norwegians were in sixth place after Karoline Offigstad Knotten's first leg, but Tiril Eckhoff struggled on the range, missing two in the prone position and five in standing. She used her three extra rounds but still had to ski two penalty loops. That dropped the team to 11th.

Strong performances by Ida Line and Marte Olsbu Roeiseland moved the Norwegians back up, but it was too late. Despite missing out this time, Roeiseland has already won four medals at the Beijing Games — three gold and one bronze.

Germany, Sweden and Italy went out front early and the teams shuffled positions several times, but the Swedes had the most consistent shooting.

Oeberg teamed with Linn Persson, Mona Brorsson and her sister, Hanna Oeberg, for the gold medal.

The Oeberg sisters just missed out on a medal in the mixed relay race by finishing fourth. Hanna Oeberg also won gold in the individual race at the 2018 Pyeongchang Olympics.