Tokyo Paralympics press ahead to allow students to attend 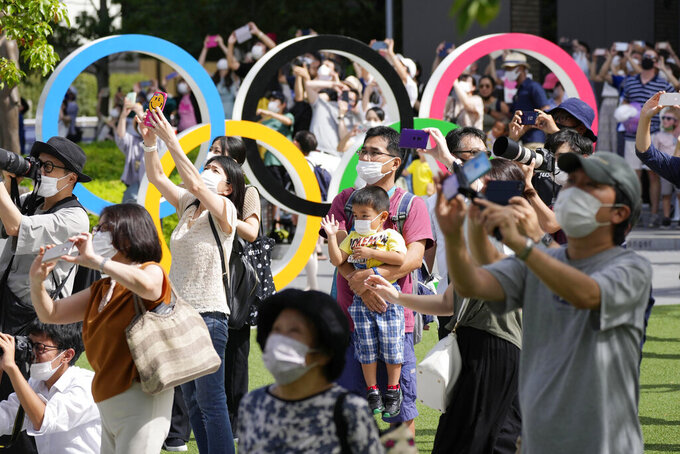 People gather near the National Stadium in Tokyo as Blue Impulse of the Japan Air Self-Defense Force practice ahead of the 2020 Summer Paralympics, Sunday, Aug. 22, 2021.(Ryosuke UematsuKyodo News via AP)

TOKYO (AP) — Plans are afoot to allow tens of thousands of school children to attend the Tokyo Paralympics despite the coronavirus delta variant spreading among teenagers and those even younger who are not vaccinated.

The Paralympics open Tuesday and run through Sept. 5. All other fans have been banned as they were for the Olympics. About 4,400 athletes are expected from about 160 countries and territories.

Tokyo Governor Yuriko Koike has said she is pressing ahead to allow school children to attend the Paralympics, as long a parents and schools are supportive. News reports say the number of students involved is between 130,000 and 140,000.

Tokyo is under a state of emergency through Sept. 12.

About 40% of the Japanese population is fully vaccinated. Tokyo reported 5,074 new cases on Saturday. It marked the first time the capital has logged more than 5,000 cases for four consecutive days. Daily new cases have increased sharply since the Olympics opened on July 23.

Hospital capacity in Tokyo has become so tight that those not deemed ill enough for hospital admission are getting oxygen supplied at home or at makeshift facilities set up for emergencies.

The Tokyo organizing committee and the International Paralympic Committee also back the plan for student fans. They argue it's important to have students view athletes with disabilities, which could change attitudes in a relatively conservative society like Japan.

“This generation is the one that will sustain our society in the future, and so we are absolutely passionate about providing this opportunity,” Tokyo organizing committee spokesman Masa Takaya said Sunday.

In an interview a few days ago, IPC President Andrew Parsons said he supported the plan — with a caveat.

“We endorse the initiative because we believe it is an important element of legacy by bringing school kids to the games,” Parsons said. “But of course, it is imperative these kids must come to the games in a safe way.”

Opposition is coming from the Japanese government’s top medial adviser. Dr. Shigeru Omi told a parliamentary session a few days ago that the current COVID-19 situation “compared to before the Olympics is significantly worse.

"If you think what it means to allow audience, the decision is quite obvious," Omi added.

In Shizuoka, located about 160 kilometers (100 miles) southwest of Tokyo, all 93 schools have canceled their planned participation because of the state of emergency taking effect in the area beginning on Aug. 20, according the Mainichi newspaper.