Track cycling efforts in US hampered by outdated facilities 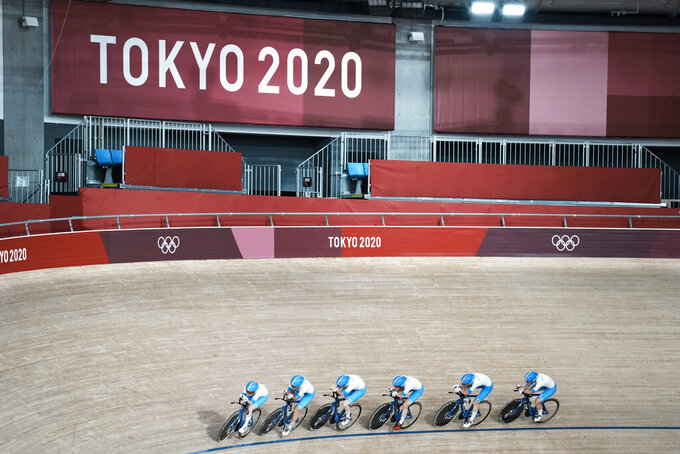 Members of the Italian women's track cycling team round the track during a training session inside the Izu velodrome at the 2020 Summer Olympics, Thursday, July 29, 2021, in Tokyo, Japan. (AP Photo/Thibault Camus)

GOTEMBA, Japan (AP) — There was a time in America when thousands of fans would don their best suits and shirtwaists, their bowler hats and finest jewelry, and descend on Madison Square Garden in New York to watch the world's best cyclists.

In fact, the old arena even lent its name to one of track cycling's signature events, the Madison, a two-person team effort that's returning to the Olympic program for the Tokyo Games.

That was more than a century ago, though. Now it's nearly impossible to find a velodrome in the United States, unless you live on one of the coasts and are willing to drive. There are 27 cycling tracks spread across the country, but few of them are usable year-round, only three are indoors and just one, near Los Angeles, meets international standards.

The sport had ebbed in popularity by the 1920s, and a century later, the Americans are still trying to play catch-up.

“I'm one of the few that happened to grow up near a velodrome and 100% that's how I ended up here,” said Jennifer Valente, who will compete in three different events for the U.S. when track cycling begins Monday.

“If I grew up in a city without a velodrome,” she said, “that wouldn't have happened. The San Diego velodrome has kids classes, you can ride the track in a noncompetitive environment, learn the basics. That was important.”

The reason all of this is important? More than half of Olympic cycling medals are decided on the track.

It's a self-perpetuating cycle of success.

“It's not pure science. You have kids just as good sitting on the outside trying to get in,” said Rob DeMartini, the CEO of USA Cycling. “I think where we're 100% aligned, we will not get to our medal goals for Los Angeles or Paris without some significantly better performances on the track. We do well in some of the endurance events, especially our women, but we're not very successful in sprints. And we're almost non-existent on the men's side.”

There are a multitude of reasons why some nations have become dominant on the track. In the case of Britain, they pump money from the lottery into financing their cutting-edge program. In the case of the Dutch, the sport is so overwhelmingly popular — think football or basketball in the U.S. — that the talent pool is naturally deep.

But both nations, along with powers such as Germany and Italy, also have a plethora of facilities at their disposal.

Britain has 21 velodromes in England, three more in Wales and two in Scotland, and several are among the best in the world. The velodrome in Manchester is the home of British Cycling, and the facility in Newport was used as a holding camp before the team arrived in Tokyo. The velodrome in London that was used for the 2012 Games is still used for elite events, but it's also become a popular place for children and amateurs to ride, stoking the fire of the next generation.

There are 17 velodromes in France, five of those indoors. Italy has 31 of them. There are a whopping 64 facilities across Australia, seven of them indoors, including the arena for the 2000 Sydney Games and another in Melbourne that was built in 2000 and will probably be renovated or replaced for the 2032 Games.

“When I was growing up,” Britain's Elinor Barker said, "I was close to the main outdoor velodrome (in Cardiff) and 25 minutes to Newport Velodrome. I never appreciated how close I was to those facilities. And those people it brings to the sport is huge, the volunteers, the people around you once you have those facilities in place.

“That,” Barker said, “is what I think has allowed British Cycling to produce so many great riders.”

It used to be that way in the U.S., too. There were hundreds of velodromes in the late 1800s up until World War II, when the sport began to lose popularity. Iconic arenas such as Olympia Stadium in Detroit, the home for more than five decades to the Red Wings, was famous for track cycling events that drew thousands to “The Old Red Barn.”

There have been several new facilities built over the years; few have stood the test of time. That includes the outdoor Stone Mountain Velodrome used for the 1996 Atlanta Games. Its track surface was later sold to a velodrome in Quebec.

“Track cycling is such a foreign sport. Cycling in general is foreign,” said American rider Megan Jastrab. “In Europe, you drive every hour or whatever, you have another velodrome. And they're nice facilities, too. All are indoor and wood tracks.”

Most of those that do exist in the U.S. are outdoors with concrete or asphalt surfaces, making them unusable in the rain or the winter. Many have fallen into disrepair, weeds growing out of the cracks and nobody willing to take care of them.

It's a wonder the stars-and-stripes even managed two silver medals at the Rio de Janeiro Games.

Yet things are ever-so-slowly improving. Even before the pandemic caused a run on bikes, drawing Americans to the sport for recreational as well as competitive reasons, several facilities across the country had invested in upgrades. Velodromes in San Diego and Wisconsin resurfaced or upgraded in 2016, and a facility in New Hampshire reopened the following year.

In 2018, an anonymous benefactor donated $5 million to build the Lexus Velodrome in Detroit. The 166-meter wooden track laid down inside a large, white dome has given cyclists in central Michigan a place to ride all year long.

“It would be fantastic to have more facilities. To have a bigger program, a bigger pipeline. Some other countries have that and you see the results," Valente said. “Hopefully, we're moving in the right direction.”