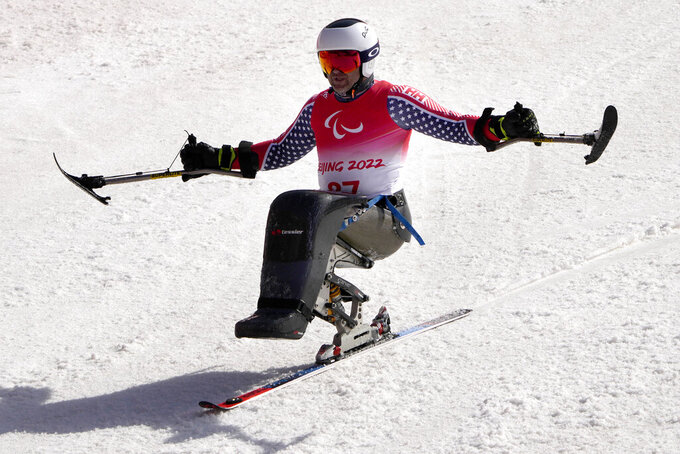 Jasmin Bambur of the United States reacts after competing in the men's giant slalom, sitting event at the 2022 Winter Paralympics, Thursday, March 10, 2022, in the Yanqing district of Beijing. (AP Photo/Andy Wong)

Back to three decades ago, when he and his family escaped the conflict in the former Yugoslavia.

Bambur made it from Bosnia to Serbia and eventually to the United States, where he was working on his degree and training for team handball when a car crash left him paralyzed from the waist down.

“Fourth time’s the charm," said Bambur, who finished 16th in the men’s sitting classification of the giant slalom Thursday in Beijing, with another medal chance this weekend in slalom. “This gold medal, it’s been one of those unicorns that I just haven’t been able to attain yet.”

Bambur's childhood memories flooded back with Russia's invasion of Ukraine. His family fled Bosnia in the 1990s when war was breaking out, taking only a few belongings with them. They relocated to Serbia, where jobs and money were scarce for his mom and dad.

Bambur found an outlet through team handball, a sport that combines elements of basketball and soccer. When he reached military age, his family sent him to the United States. He attended what’s now Middle Georgia State University and trained for team handball.

On Jan. 13, 2000, Bambur was driving home from a training session when he fell asleep at the wheel. He hit a curb and his car rolled, hurtling him through the windshield.

Bambur skidded along the road as his car tumbled ahead, settling into a ditch about two football fields away.

Next thing he knew, he was waking up in a hospital room to a nightmare: More than 80 stitches in his head, his right shoulder dislocated, his left arm broken, the skin on his back gone and a spinal-cord injury.

Doctors told him he would never walk again.

“I was like, ‘You have no clue what I’ve been through,’” Bambur said.

The gravity of it all really hit him about 48 hours later when his mother walked into his room.

“That was literally impossible,” he said of her gaining entry into the U.S. from Serbia at the time. “I was like, ‘Oh boy, this is serious.’”

“I’m telling these people, ‘Just let me die,' " he recounted. “There was no reason to get better.”

A therapist kept encouraging him while he went through rehab. She brought in an album filled with photos from skiing and kayaking trips. Next to her was her husband, who was in a wheelchair.

“I was like, ‘This guy has an absolutely fabulous life. All over the world and doing all kinds of fun stuff,’ ” Bambur said.

Then, he was introduced to the person in the photos — Bert Burns, a 1992 Paralympic gold medalist as part of the 4x400 relay.

“From that day on, I just literally took the bull by the horns and rode into a sunset,” said Bambur, whose mom, dad and brother relocated to North Carolina. “I’m always grateful to this family, for what they have done for me.”

Bambur tried wheelchair tennis and basketball before turning to ski racing. It was always something he enjoyed (his father was once a ski coach at a resort in Bosnia).

“I found an activity that involved speed, that was very aggressive, that I was completely independent — and I looked cool," cracked Bambur, who resides in Granby, Colorado.

He married his wife, Sarah, in May of 2007 and a month later they moved to Colorado so he could give ski racing a go for a season. If he didn't succeed, he would return to his desk job.

“It was great motivation,” he said, “because I didn't want to go back to that cubicle.”

For the Paralympics in Beijing, Bambur switched his focus from speed events to the GS and slalom. His ambition remains the same as always — gold.

“Everything that I do has to be 110%, whether it’s playing tennis, swimming, fishing, hunting," said Bambur, who has three daughters, all of whom started skiing at a young age. “I always want to be on top of my game.”

He's full-speed ahead away from the slopes, too.

Bambur and his wife started a medical supply company after the Sochi Paralympics. He also sends equipment to Serbia to help out its Paralympic program. In addition, he gives encouraging talks to those who are experiencing similar traumas.

"I always tell them, ‘Hey dude, you’re the only one that can change all of this. So how about you put a smile on your face, get out of this room and I will show you some of the ropes,'" Bambur said.

“Because life is full of surprises."