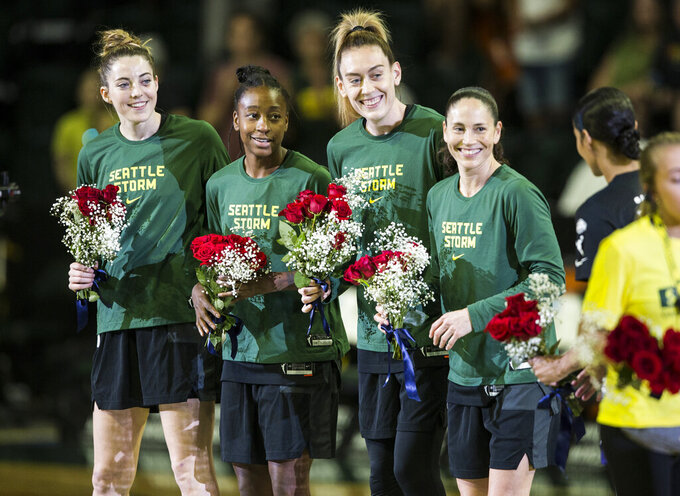 HIGHLIGHTS FROM RIO: The United States won its sixth consecutive gold medal in women's basketball with arguably the best team ever assembled. The Americans routed their opponents, winning by an average of nearly 40 points a game, including a 29-point win over Spain in the championship contest. Serbia edged France for the bronze medal.

TOKYO EXPECTATIONS: The U.S. is the heavy favorite to win another gold and give Diana Taurasi and Sue Bird a record fifth Olympic gold medal. The only previous American to play women's basketball in five Olympics was Teresa Edwards. She won four golds and a bronze. It should be a really interesting contest to see who will join the U.S. on the medal podium with a handful of nations having their eyes on winning a medal, including Serbia, Spain, France, Canada and host Japan.

WNBA FLAVOR: Besides the U.S. team, many of the other countries are led by WNBA stars. Half of the Australian roster, led by Liz Cambage, is currently in the WNBA. The Opals are led by Phoenix Mercury coach Sandy Brondello. Some of the other WNBA players in the Olympics include Emma Meesseman (Belgium), Kia Nurse (Canada), Marine Johannès (France), Astou Ndour (Spain).

AFRICAN DREAMS: Nigeria will try and end a winless drought for African teams at the Olympics since the 2004 Athens Games. The African nation went 1-5 that year and no team from that continent has won a game since. There are hopes for that to potentially change: Nigeria went 3-4 at the World Champions in 2018, falling to the U.S. in the quarterfinals.

WHAT'S NEW: With the addition of 3x3 as a basketball discipline, teams are now only playing potentially six games at most in the tournament instead of eight. The last time the medalists played fewer than eight games was 1992. The 12 teams were put into three pools instead of two. The quarterfinalists will be the top two teams in each pool and two others based on a FIBA ranking system.

The gold medal game is set for Aug. 8.