US water polo players flock to Europe to prepare for Tokyo 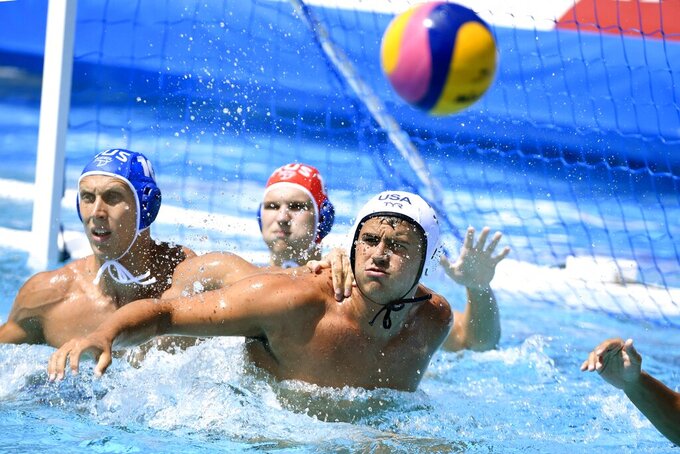 Ben Hallock, right, of the U.S. and Dmitrii Kholod of Russia fight for the ball during the men's water polo Group D third round match of the 17th FINA Swimming World Championships in Hajos Alfred National Swimming Pool in Budapest, Hungary, in this Friday, July 21, 2017, file photo. Hallock, 23, is among 18 U.S. men’s water polo players who joined professional teams in Europe after COVID-19 hampered their training in California. (Szilard Koszticsak/MTI via AP, File)

CHICAGO (AP) — One day, after another grueling practice with his water polo team in Italy, Ben Hallock hopped on a scooter and drove to the top of a nearby mountain.

Unfurled below the promising American center was the picturesque Liguria coast.

“The scenery, I mean, it's unbelievable,” Hallock said.

The landscape for his teammates back home is pretty impressive, too.

Hallock, 23, is among 18 U.S. men’s water polo players who joined professional teams in Europe after COVID-19 hampered their training in California. The size of the group is an unprecedented showing for a country that usually places just a handful of players in the top leagues each year.

Their teams include some of the top programs in the world. Hallock plays for powerful Pro Recco in Northern Italy near Genoa. Hannes Daube and Max Irving swim for Olympiacos in Greece, and Alex Obert plays for VK-Jug in Croatia.

The pay depends on the team and experience level, likely around 20,000 euros (over $24,000) for first-year Americans in Europe — except for NCAA athletes who forgo a salary in order to retain their amateur status. Players also receive housing, transportation and other assistance depending on the situation, in addition to their usual support from USA Water Polo.

Not bad at all, but it's still a professional sport in a country with an unfamiliar language and culture in many cases. The isolation is only enhanced by the coronavirus pandemic, which will keep many of the players away from their family and friends over the holidays.

It's a brand new world even for the well-traveled U.S. players, especially in the pool.

“Every day is pretty much the highest level water polo game I've been playing in my life,” Hallock said in a Zoom interview with the AP. “Maybe not the same intensity as an Olympic Games, but the quality of players is astronomically higher than anything you see in college or something.”

U.S. men's coach Dejan Udovicic had long wanted to see more of his players compete in Europe. But the idea took on added importance when the coronavirus pandemic pushed back the Tokyo Olympics to next year and shut down pools all over America for much of this summer.

While the U.S. men have embraced more foreign opportunities this year, the women's team has worked around pandemic restrictions while training together in the U.S. For the women, the two-time defending Olympic champions, there is likely no better competition in the world than playing against each other.

Udovicic, who coached Serbia to a bronze medal at the 2012 Olympics before taking over the U.S. program, had a hand in most of the European placements for his players. He had much of the national team together in Greece in October, but a couple of training sessions and competition opportunities were canceled because of COVID-19.

The U.S. team could get back together again in January, and the professional season finishes in plenty of time for his players to get on the same page ahead of Tokyo.

“What I like to see (is) that our guys figure that they're good,” he said. “Playing with them, they're seeing they're good. They got qualities, which we knew.”

While Europe has provided more consistent training opportunities for the American players, the pandemic remains a constant presence in their lives. Testing isn't as frequent as the major professional sports leagues in the U.S., but teams are divided into groups for some training sessions to facilitate social distancing. Training areas are cleaned on a regular basis, and they wear masks when they are out of the pool.

Even with the protocols, the top league in Greece was shut down because of coronavirus concerns, and it's unclear when exactly it will resume play. Johnny Hooper returned to the U.S. after the league was suspended, but plans to go back when it starts up again.

“I went out there with a lot of fire and it was exciting just to get back in the water and compete at the highest level we can,” Hooper said. “So for me, it was a relief, and I was super excited to get back into it. And there wasn’t really any drawback or hesitation going into the league. So I had a great time.”

Hooper's experience was helped by rooming with U.S. teammate Chancellor Ramirez in an apartment provided by their Greek team, Palaio Faliro. Marko Vavic lives with his brother, Nikola, who also plays for Roma Nuoto in the Serie A1 League in Italy. Obert is sharing a place with American goaltender Jack Turner, a practice squad player with VK-Jug.

“It’s definitely nice for both of us," Obert said.

Obert had contemplated retiring from water polo, but he talked to his wife, Michele, a former national team player for Canada, and set his sights on Tokyo. When he got into business school at the University of Arizona, he decided to take online classes while he was playing in Croatia.

So when Obert is out of the pool, he spends his time on homework and as many group meetings as he can attend given the time difference.

“It’s been crazy,” he said. “It’s been like being back in undergrad, but also on steroids.”

The main driver for Obert is the Olympics after he played on the U.S. team that finished a disappointing 10th in Rio. It's a familiar refrain when it comes to the American contingent in Europe, looking to make a big splash next year in Japan.

“That was the whole reason I came, was preparing for Tokyo,” Marko Vavic said, "because being in (Los Angeles), you just didn't know what the situation was going to be. I wasn't allowed in a pool for like four to five months.

“Just coming out here, getting high-level training and high-level games, that’s the entire reason I came.”