As war rages, Paralympics open in Beijing without Russia 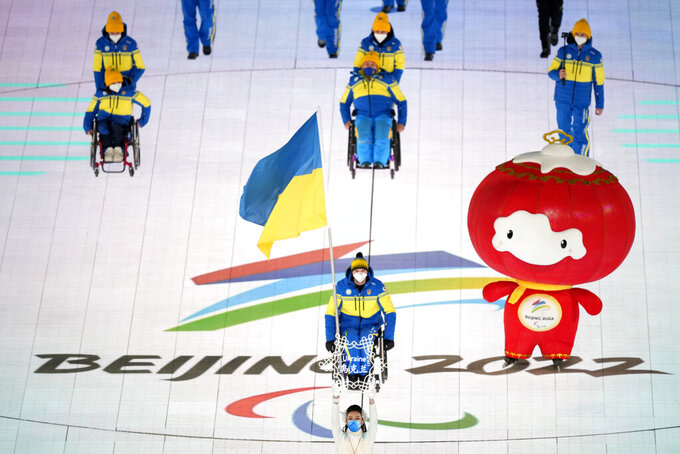 Maksym Yarovyi of Ukraine carries the flag as the team makes their entrance during the opening ceremony at the 2022 Winter Paralympics, Friday, March 4, 2022, in Beijing. (AP Photo/Dita Alangkara)

BEIJING (AP) — The Winter Paralympics opened Friday in Beijing with the Russian athletes sent home, the Ukrainian team escaping a war zone to get to China and an impassioned call for peace.

Andrew Parsons, the president of the International Paralympic Committee, declared his horror at the fighting in Ukraine and called on world authorities to promote peace.

“Tonight, I want, I must begin with a message of peace,” Parsons said in brief remarks to the athletes and spectators at the Bird's Nest stadium. “As the leader of an organization with inclusion at its core, where diversity is celebrated and differences embraced, I am horrified at what is taking place in the world right now.”

Russia's invasion of Ukraine, shortly after the Winter Olympics wrapped up in Beijing, is roiling the world. And the world of sports is no exception.

Paralympic organizers initially announced that Russians and Belarusians would be allowed to compete in Beijing, but reversed course one day before the opening and expelled athletes from both countries. They cited tensions in the Athletes Village. The Russian Paralympic Committee called the decision “absolutely politicized.”

The live broadcast of the opening on Chinese state TV did not translate Parsons’ condemnation of war and and then lowered the volume of his remarks in English for a while. The Chinese government has been restricting anti-Russia views in state media and online. Unlike the U.S. and Europe, it has not criticized the invasion and opposed sanctions on Russia.

Ahead of the opening, about 16 members of the Ukrainian team, wearing their yellow and blue winter outfits and knit hats, chanted “peace for Ukraine” as they held up large banners including “Stop War” in a holding area for the participants. Competitors from other countries applauded and cheered and a few came up and hugged the Ukrainians.

Maksym Yarovyi carried the country’s now widely known blue and yellow flag into the stadium at the head the delegation. All the athletes and spectators wore face masks to protect against the coronavirus, including Chinese President Xi Jinping and other dignitaries.

“It’s a miracle that we have made it to the Paralympics,” Ukrainian delegation head Valerii Sushkevych said earlier.

He said it took four days for team members in Ukraine to reach Beijing, and that he slept on the floor of a bus because of a back condition during the last two days of the journey through Europe.

“We overcame a lot of barriers on the way,” Sushkevych said. “Many members of our team had to escape while there was bombardment and shells exploding.”

Li Duan, a blind former long jumper for China who won gold in Athens in 2004 and in Beijing in 2008, felt around for the holder and then struggled a bit to insert the flame. The crowd cheered him on until he mounted it properly in the center of a large white snowflake that then ascended to the top of the open-air stadium.

A total of 564 athletes, of which 138 are women, are competing in the Paralympics. China has the largest team, with 96 competitors, followed by the United States with 65. The Paralympics includes six sports — Alpine skiing, cross-country skiing, biathlon, hockey, snowboarding and curling.

"Much work still needs to be done to achieve gender parity but having increased female participation significantly at the Winter Games in the last 20 years shows we are heading in the right direction,” Parsons said.

The 10-day Paralympics close on March 13.