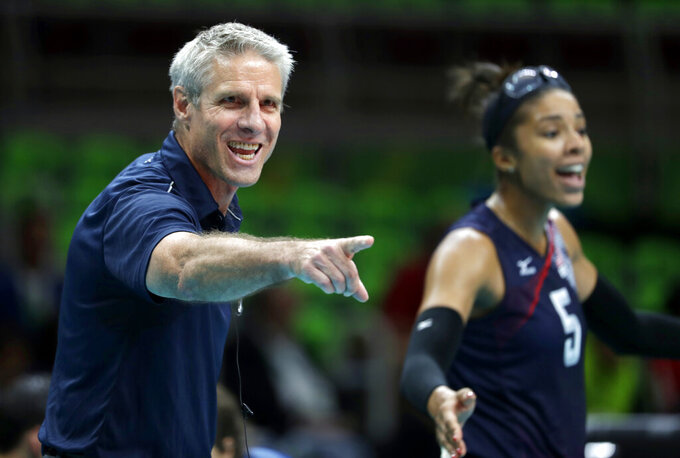 FILE - In this Aug. 20, 2016, file photo, United States head coach Karch Kiraly, left, and Rachael Adams react on the sideline during a women's bronze medal volleyball match against the Netherlands at the Summer Olympics in Rio de Janeiro, Brazil. When the pandemic hit last March leading to a one year postponement of the Olympics and the inability of teams to practice and play together, the U.S. women's volleyball team devised a plan. Unable to work together on serves, sets or spikes, they decided to use that extra time to work on culture, relationships and teamwork. (AP Photo/Jeff Roberson, File)

When the pandemic hit last March leading to a one year postponement of the Olympics and the inability of teams to practice and play together, the U.S. women's volleyball team devised a plan.

Unable to work together on serves, sets or spikes, they decided to use that extra time to work on culture, relationships and teamwork.

What followed were a regular stretch of mostly player-only Zoom meetings coordinated by former UCLA softball coach Sue Enquist that began as weekly sessions and went to monthly as players dispersed around the world for their club seasons.

“It was an unorthodox route. That’s not something that our program’s done before,” coach Karch Kiraly said. “A lot of the players on our team felt really strongly about it. They felt so convinced that they convinced me, too. We took a calculated risk in doing something new and different at the time that wasn’t so far away from the Olympics, 14 months away. ... We had never done it before. So I didn’t know what to expect. But I knew some good things would happen.”

The results have exceeded the expectations of both the players and the coaching staff. The hour-long sessions that allowed players to open up to their teammates in ways they hadn't done before and exposed their personal vulnerabilities helped build a bond on a team that features eight players making their Olympic debut this year.

While results may not have always seemed evident during those calls, the difference when the team got back together this spring to prepare for the Olympics was clear, and the players hope that can help the U.S. team get over the hump and win the gold medal for the first time.

Enquist had players share what they felt was holding them back individually and as a team, as well as tell their teammates one thing they loved about each other and one thing they should improve.

“It wasn’t until we came back together as a group that I realized that each time we met and discussed things and got closer as a group, you’re just making small deposits and all those small deposits led to a big change,” said middle blocker Foluke Akinradewo Gunderson, who acknowledged being initially skeptical of the approach.

“So even though we unfortunately weren’t able to be together due to COVID, the time that we spent, those one hour meetings over the course of a year, really made a difference and you felt that once we all came back together.”

The process started after a few of the players were on a Zoom call when Enquist made a presentation to several U.S. Olympic teams.

A few leaders went to Kiraly and asked if Enquist could work more extensively with the team and she was hired as a consultant. Now a group of players used to being apart for most of the year had a way to bond together, even if it was only virtually.

“At the time, we were kind of having some just interpersonal issues on the team," said Jordan Larson, who is headed to her third Olympics. “We really kind of took it upon ourselves, ‘Hey, let’s try this as athletes.' It just created a lot of conversations. She’s really trying to facilitate those or taking us through leadership and being a part of a team. She’s been great and very instrumental to a lot of that growth off the court.”

Enquist has an extensive history with elite athletes, having been an All-American softball player at UCLA in the 1970s before a long career as a coach at her alma mater and for the U.S. national team. She was part of 11 NCAA champions as a player, assistant and head coach for UCLA before shifting to her next career helping coaches, teams and young athletes on the mental part of the game.

She considers herself a disciple of legendary UCLA basketball coach John Wooden where it is more important to be motivated by improving and taking care of each other than winning titles.

Those are lessons she didn't always follow as a coach herself as she once famously had to apologize after throwing a fourth-place trophy in the trash after a tournament in Hawaii in 2000.

“I have so much respect for how challenging it is to play as one when you have a whole team of superstars. I knew this was going to take months to build up equity with them,” she said. “Then I had the first Zoom meeting and my jaw dropped. This was a team that was so honest with each other and so caring for each other and unselfish. I thought to myself, we may be able to create that synergy sooner than I thought.”

Enquist said she wanted to be hired for a three-month probationary period at first to make sure her message was getting through.

An anonymous survey after that stretch showed her it was working and she has remained involved since then. She called the team “one of the most impressive groups” she's been around because of the way they care about each other and is gratified by the response from the players.

“I have so much joy for them that they are reaping the benefits of who they are," she said. “As much as they may say, ‘Oh, Sue came in and helped us with these areas,’ actually what I did, I came in and I shined a light on who they are.”