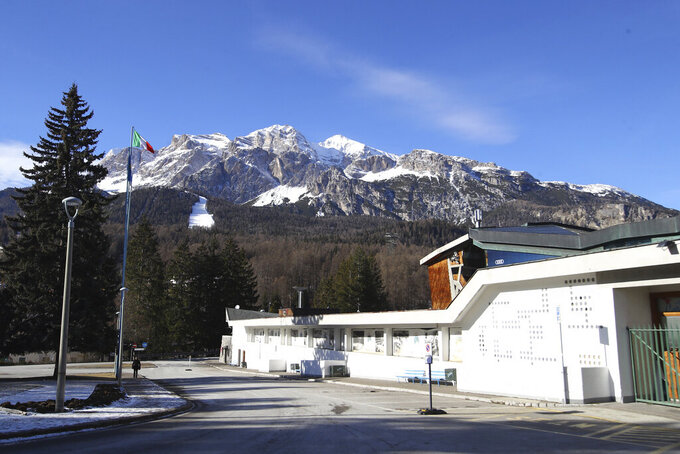 A view of the Palazzo del Ghiaccio (Ice Palace) in Cortina D'Ampezzo, northern Italy, Wednesday, Jan. 16, 2019. A wide swath of northern Italy will benefit from 1 billion euros ($1.2 billion) in infrastructure development that the government has signed off on to improve access to the venues for the Milan-Cortina Winter Olympics in 2026. (AP Photo/Marco Trovati)

ROME (AP) — A wide swath of northern Italy will benefit from more than $1 billion in infrastructure development that the government has signed off on to improve access to the venues for the Milan-Cortina Winter Olympics in 2026.

Milan-Cortina Foundation CEO Vincenzo Novari said the decree — approved Wednesday despite a second wave of the coronavirus sweeping through the country — shows that hosting the games “is already an efficient source of economic development that will realize projects that citizens have been waiting for.”

The 1 billion euros ($1.2 billion) in funds are destined for road and railway projects in the Lombardy and Veneto regions and the autonomous provinces of Bolzano and Trento that will host the games.

“The works that are being financed serve to improve access and connections for (the Olympics) but they were conceived to maintain their usefulness over time, even after 2026, and will be realized according to environmental sustainability standards,” Infrastructure and Transport Minister Paola De Micheli said.

All of the projects must be completed before the games begin in February 2026, according to the decree.

The venues for the games themselves will be financed privately according to the agreements with the International Olympic Committee. The 2026 Games' budget — which does not include the infrastructure spending — is 1.5 billion euros ($1.8 billion).

Still, the government's financial commitment will likely be disputed in years ahead on the sensitive subject of how much the Olympics will cost taxpayers to host.

Figure skating, hockey and short track speedskating will be contested in Milan; sliding sports and curling in 1956 host Cortina; and speedskating, biathlon and Nordic sports in Trentino-Alto Adige.

Alpine skiing will be divided between Bormio (men) and Cortina d’Ampezzo (women).

The opening ceremony is slated for the 80,000-seat San Siro in Milan or a new stadium that is proposed for the city, with the closing event at the Verona Arena, a large Roman amphitheatre.

Meanwhile, the IOC is still awaiting a response from the Italian government regarding accusations of political interference that could — under extreme circumstances — result in the country being stripped of hosting the 2026 Games.