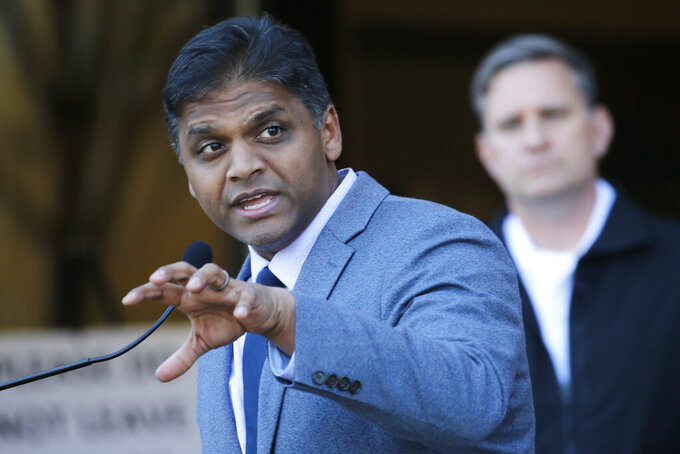 RICHMOND, Va. (AP) — A Virginia long-term care facility with one of the nation’s worst coronavirus outbreaks announced Thursday that its death toll had reached 16 as new testing confirmed roughly two-thirds of its residents have COVID-19.

The Canterbury Rehabilitation & Healthcare Center in suburban Richmond tested all its residents earlier this week after the virus began sweeping through the facility in mid-March, a time when limited supplies and strict policies on who could be tested meant such a response was not possible.

Ninety-two in-house or hospitalized residents have tested positive, the facility said in a statement, up from 41 positive tests earlier in the week. Only 35 tested negative, and 15 tests were still pending, meaning approximately two-thirds of the facility had become infected with the virus.

More than half of those who tested positive didn't show any symptoms, a finding Dr. Danny Avula, director of the Richmond and Henrico health districts, called surprising.

Canterbury's statement said the fatality count had increased due to five deaths over a recent 24-hour period and post-mortem testing that confirmed three people who had previously died were positive for the virus.

Antonio Turner, whose 65-year-old uncle is a resident, said he believes the state should temporarily shut down the center.

“At what point does the state come in and make a decision like that? They're leaving it up to the nursing home itself. It's clear that the nursing home is not able to contain the scenario. The death toll is going up and the people testing positive are going up,” he said.

Canterbury has faced both a staffing and supply shortage amid the crisis, though officials have said both have improved in recent days. As of Wednesday afternoon, 25 workers had tested positive, according to administrator Jeremiah Davis.

Avula said work was still ongoing to test all staff.

Canterbury has said it ended visitations before the first confirmed COVID-19 case and has implemented extra sanitizing measures. All COVID-19 patients were being treated in an isolated unit with dedicated staff.

The facility's medical director, Dr. Jim Wright, said in an interview with AP earlier this week that at one point in the outbreak, staff were triaging patients in a way he never expected to see in the United States.

Even moving patients into the isolation unit was challenging.

“We had enough going on at that point with patients crashing, you know, sudden onset of high fevers and respiratory failure,” he said.

Davis, the administrator, wrote in email to families Thursday that it was hopeful many of the asymptomatic residents would never develop severe symptoms. But he acknowledged that the results “may heighten your concern about your loved one at a time that is already extremely difficult.”

Investigations are underway into “clusters” of coronavirus in seven long-term care facilities in the Richmond and Henrico health district alone, Avula said, though none as severe as Canterbury.

The state health department has not provided information about how many outbreaks there may be statewide in nursing or other long-term care facilities, and it is not clear if an effort to compile that information is underway.

The federal government has not been releasing a count of its own, but an AP tally from media reports and state health departments indicate at least 450 deaths and nearly 2,300 infections have been linked to coronavirus outbreaks in nursing homes and long-term care facilities nationwide.

Statewide, at least 41 people in Virginia have died from COVID-19, according to the latest statistics from the Department of Health. It was not immediately clear whether all the Canterbury deaths had been accounted for in that total.

“We're deeply heartbroken for the lives that have been lost, for the families and for the staff who are living through this day in, day out and dealing with the trauma of that, yet showing back up to work and working double shifts and doing everything they can to keep things moving forward at Canterbury Rehab,” Avula said.