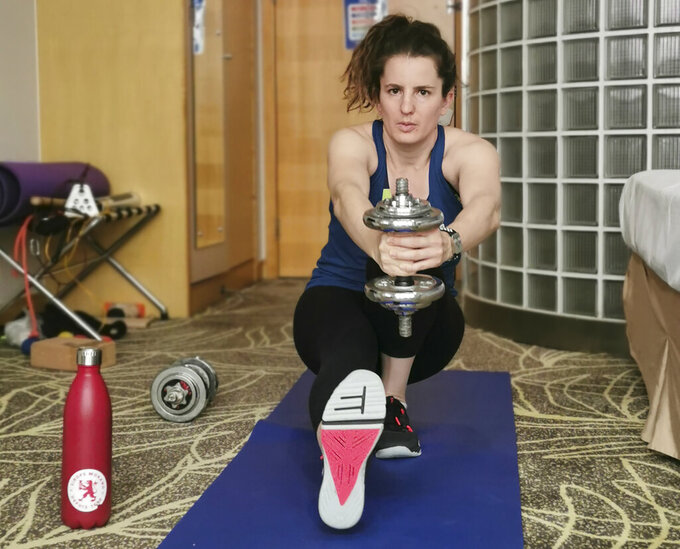 Swiss snowboarder Patrizia Kummer works out in her hotel room in Beijing on Jan. 19, 2022 where is undergoing a 21 day quarantine. Three weeks alone in a hotel room is hardly an ideal setting for a snowboarder preparing for the Olympics. Kummer, a Swiss competitor who won a gold medal at the 2014 Sochi Olympics, is unvaccinated against the coronavirus by choice, so she is spending 21 days in isolation in China before the Winter Games begin in Beijing on Feb. 4. (Patrizia Kummer via AP) 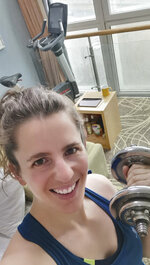 Three weeks alone in a hotel room is hardly an ideal setting for a snowboarder preparing for the Olympics.

Patrizia Kummer, a Swiss athlete who won a gold medal at the 2014 Sochi Olympics, is unvaccinated against the coronavirus, so she is spending 21 days in isolation in China before the Winter Games begin in Beijing on Feb. 4.

Even though vaccine rules are strict for the upcoming Olympics, a few unvaccinated athletes will still be taking part.

Kummer said she doesn’t want to influence anyone else’s views on vaccination and thinks the quarantine requirement is fair, but also declined to discuss her “personal reasons” for refusing a vaccine.

The Beijing Games are being held under severe protocols as part of China’s “ Zero COVID ” policy. The government has locked down several cities in the lead up to the Olympics because of the presence of only a handful of cases of the highly contagious omicron variant that has surged throughout the world.

The coronavirus can cause disease and death in younger people, including athletes. Scientists believe vaccinating as many people as possible will help slow the virus’ spread, which will help in preventing the emergence of new variants and in building immunity more broadly in the population.

When Kummer competes on Feb. 8 in her third Olympics, she will have been in China for nearly a month.

Some countries have refused to select unvaccinated athletes for their Olympic teams. Other athletes have a choice between vaccination or the 21-day quarantine. A few will compete unvaccinated without quarantine after getting exemptions on medical or legal grounds. That includes some young Russian athletes who weren’t eligible for vaccines at home.

Kummer is staying in a Holiday Inn in northern Beijing, far from the mountains where some Olympic events will be held. Food is brought to her door three times a day, there’s a stationary bike for exercise, and she brought a yoga mat, weights and fitness equipment.

When she’s not working out, Kummer visualizes riding the snowboard she has propped against the wall, streams TV shows or works on her plans to renovate a historic building back home in Switzerland.

That’s life in what the International Olympic Committee calls the “dedicated facility” for unvaccinated athletes waiting to enter the “closed loop” of the Beijing Olympics.

Kummer thinks she’s the only unvaccinated athlete in quarantine, but doesn’t know for sure. The IOC declined to say whether there are others, saying only that “close to 100% of the residents of the Olympic and Paralympic Villages” will be vaccinated. Nearly 3,000 athletes are expected at the Beijing Games.

Austrian snowboarder Claudia Riegler is in a stand-off with her Olympic team, which is threatening to leave her at home if she doesn’t get the vaccine.

Kummer and Riegler are friends who bonded on a long drive home through the Alps when they were both turned away from a World Cup race in Italy last month for being unvaccinated. They wanted to ask for quarantine rooms next door to each other in Beijing before Riegler’s dispute with her team became public, and they did an online fitness class together after Kummer arrived in China.

Austrian news agency APA reported that Riegler has until Sunday to get her first vaccine shot or be left off the team. The four-time Olympian doesn’t want to be vaccinated after having contracted the virus over the Christmas period, APA reported.

The United States and Canada imposed vaccine mandates last year for their Olympic teams. The Americans said all of their Winter Olympians will be vaccinated, as did other countries, including Britain, Sweden, France, Italy, the Czech Republic and Slovakia.

A few unvaccinated athletes will be able to compete without quarantining.

The IOC said a panel chosen by the Olympic body and China will rule on exemptions for medical or legal reasons. Examples include people who are allergic to vaccine ingredients, or who take medicines which suppress the immune system. Olympic organizers use the laws in an athlete’s country of origin as a guide to decide on exemptions.

Russian officials have estimated seven athletes — including some figure skaters — will compete unvaccinated because they are under 18 and weren’t eligible for any vaccine at home until recently.

A version of the Sputnik vaccine received government approval in November for use in children between the ages of 12 and 17 but is not yet widely available. Russia doesn’t let people under 18 receive other vaccines.

In tennis, Novak Djokovic used a positive test dated in December as evidence he had recovered from the virus to get an exemption for the Australian Open while unvaccinated. He was eventually ordered to leave the country after a legal battle.

Evidence of a previous infection could be enough to get an exemption for the Beijing Olympics but IOC guidelines indicate that would work only if the athlete’s home country has ruled that infected people are “not eligible” for a vaccine. There is no indication anyone has applied for an exemption on those grounds.