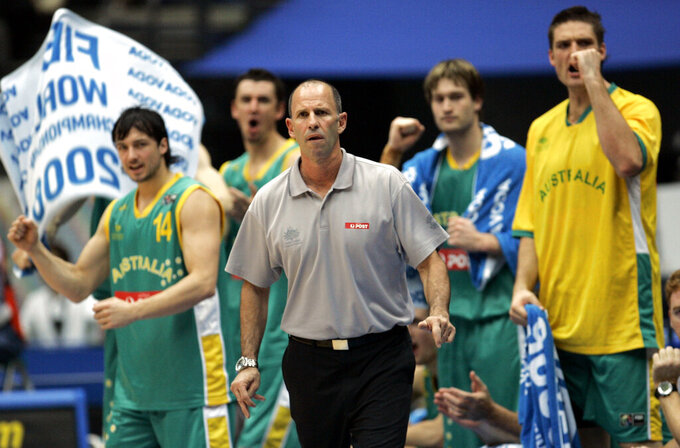 California-born Brian Goorjian will take the Australian men's basketball team to a third Olympics after he was hired as head coach of the Boomers on Friday.

Basketball Australia said the 67-year-old Goorjian will lead Australia at the delayed 2020 Tokyo Olympics next year from July 23 to Aug. 8 after appointing him coach of the senior men’s team through to the 2023 FIBA Basketball World Cup.

Brett Brown was originally scheduled to take the Australians to the Tokyo Games but he quit last month after being fired by the Philadelphia 76ers in August.

Goorjian's most recent international assignment was with the Xinjiang Flying Tigers in the Chinese Basketball Association. After the Beijing Olympics he also spent two years with the Japanese national basketball team.

“Brian’s success as a coach both domestically and internationally, plus his experience on the Olympic stage made him a standout candidate," Basketball Australia chief executive Jerril Rechter said in a statement.

“His appointment . . . elevates the excitement we feel for the Boomers, not just in Tokyo where we have podium expectations but also beyond this Olympic campaign.”

The Australian men's team has never won a medal in 14 attempts at the Olympics. The closest they came was at the Rio Olympics in 2016 when they lost the bronze medal game to Spain 89-88 on two controversial late free throws.

“”Welcome back Goorj!" Bogut said on Twitter. The former No. 1 NBA draft pick plans to be back with the Boomers next year, as does Mills.

“Being reunited with some of the guys I previously coached at the Beijing Olympics is an exciting prospect," Goorjian said. “Australia is very fortunate to have such a talented group of athletes at this time. There is certainly a feeling of unfinished business."

The Australian-born Simmons hasn’t represented the Boomers at an Olympics or world championships after being cut from the final World Cup roster in 2014 and focusing on his rookie NBA season during the 2016 Rio Games.

“He is a phenomenal basketball player, and he would be great for this (Olympic) campaign,” Goorjian said. “He is a piece that could make a big difference. I’m sure all the players would be excited if he were to be a part of the team.”