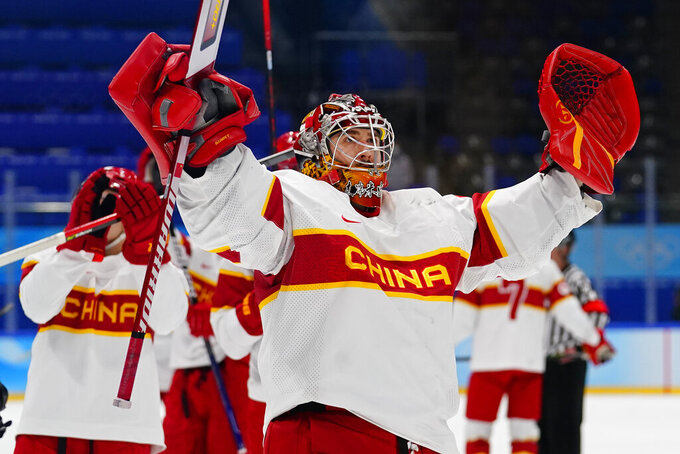 China goalkeeper Jieruimi Shimisi (Jeremy Smith) waves to fans as the team leaves the ice after a preliminary round men's hockey game against Germany at the 2022 Winter Olympics, Saturday, Feb. 12, 2022, in Beijing. (AP Photo/Matt Slocum)

BEIJING (AP) — They made their Olympic debut as expected — with three straight losses. They are outmatched and consist mostly of foreign players. And now comes the obvious question: Can China’s men’s ice hockey team kindle a passion for the sport in a country unfamiliar with it?

The squad's first outing against the U.S. wasn’t shown on the country’s main sports TV channel, and a Chinese Olympic delegation left the National Indoor Stadium in Beijing before the 8-0 blowout ended. On Chinese social media, chatter has been muted. “Is this a Chinese team?” asked one user on Weibo, referencing the roster drawn heavily from North America.

Goals scored against Germany in a 3-2 loss earned some praise online. Then the team was shut out 5-0 by Canada, which it faces again in the knockout round Tuesday.

“Most Chinese don't pay attention to it, because the chance for them to win a medal is almost zero,” said Xu Guoqi, a professor of history at the University of Hong Kong who has written about China’s past Olympic aspirations.

Despite the lack of Olympic mania for the team that has greeted stars like freestyle skier Eileen Gu, sports historians say not to discount ice hockey’s long-term prospects in China, where a growing middle class is fueling interest in fitness and new ice rinks have popped up as a part of a government pledge to popularize winter sports.

And though some find it jarring to see China’s team full of foreigners, experts note that importing mercenaries to help boost a sport in a country isn't that unusual around the globe.

China’s recruitment of overseas players who might have Chinese ancestry started after the country won its bid to host this month’s games, which automatically qualified it to compete despite not having a professional hockey league.

More than half the team’s 25 players were born in or grew up in North America, including some with no ties to China. They're listed with Chinese-sounding versions of their names; U.S.-born goaltender Jeremy Smith, for example, is “Jieruimi Shimisi.”

Even with its hired guns and the NHL's decision not to send players to the Olympics in the pandemic, China considered pulling its team just months before the Games to avoid potential humiliation in front of the world. When asked what success for the team would look like, a Chinese hockey executive was realistic: “Score one goal and better performance. Not a disaster.”

For players, moving to China to naturalize was a chance to compete on the Olympic stage and leave an imprint on ice hockey in another way – being a part of its development in the country. Team captain Brandon Yip, a Chinese Canadian who played in the NHL, thinks that's already happening based on the messages he's getting from local fans.

“All the DMs we get on Instagram and Weibo and WeChat — the support has been tremendous,” said Yip, who has three grandparents who were born in China.

This month’s Winter Games also come as sports culture in China has been growing.

After decades of economic growth, sports have become a way for China to diversify and continue growing its economy, said Mark Dreyer, author of “Sporting Superpower: An Insider’s View on China’s Quest to Be the Best.” He also noted the wave of interest in sports among China’s vast middle class, who increasingly see it as beneficial for their children, beyond focusing on just academics.

Helping fuel interest could be the huge number of Chinese students returning home after studying abroad in places including the U.S. and Canada. In a country of 1.4 billion people, getting even a small fraction of the population into the game could have a big impact.

Still, ice hockey has a long way to go in China, and the sport’s future in the country is far from guaranteed.

Host nations try to put their best foot forward to have a good showing across competitions, but it’s rare for countries to sustain success afterward, said Chad Carlson, a professor of sports history and culture at Hope College in Michigan.

China’s interest in developing ice hockey could also be derailed if it doesn’t see results quickly. Compared with some relatively niche sports with a limited number of elite athletes, ice hockey is a lot harder to break into given the entrenched culture and talent pipelines in the sport's powerhouse nations.

Unlike soccer and basketball, ice hockey also has a high barrier for entry since it requires access to ice rinks, coaches and equipment.

China’s performance at the Olympics will do doubt be a factor in how quickly interest in the sport could grow — and when the country will qualify for an Olympics without automatically qualifying as the host. That's not dependent on just wins and losses.

“If they endear themselves to the population, then we could see some growth in the sport,” Carlson said.

In the game against Germany, a limited number of local fans allowed in the arena erupted in cheers when the team scored its two goals. Afterward, players said they heard the chants and that the goals showed China could compete.