All agree: Russia gets a win in latest doping decision 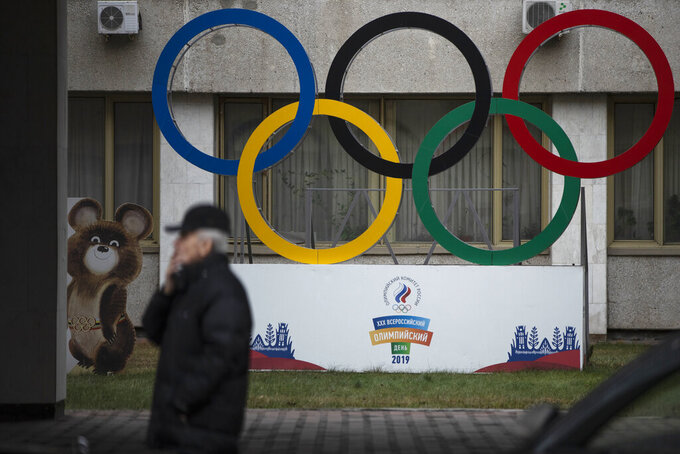 FILE - In this Nov. 28, 2019 file photo Olympic Rings and a model of Misha the Bear Cub, the mascot of the Moscow 1980 Olympic Games, left, are seen in the yard of Russian Olympic Committee building in Moscow, Russia. Russia was banned Thursday Dec. 17, 2020 from using its name, flag and anthem at the next two Olympics or at any world championships for the next two years. The Court of Arbitration for Sport's ruling also blocked Russia from bidding to host major sporting events for two years. (AP Photo/Pavel Golovkin, file)

Russia and its detractors found some rare common ground regarding the doping scandal that has engulfed the Olympics and the international sports world for the past six years.

The Russians portrayed Thursday's decision to reduce their penalties at the Olympics and other major events from four to two years as a victory.

“And this is the first time they've been accurate and truthful during this whole sordid affair,” said Travis Tygart of the U.S. Anti-Doping Agency.

While Russia mostly celebrated the two-year sanction handed down by the Court of Arbitration for Sport, others labeled the decision a watered-down miscarriage of justice that falls far short of making the country account for its transgressions.

“I am left puzzled by how a system considered dishonest, deceitful and seeped in systematic doping by CAS gets away with a two-year ban,” said Linda Helleland, a former vice president at the World Anti-Doping Agency.

Or, put more succinctly: “My point is, this is not really a sanction,” said retired U.S. cross-country skier Noah Hoffman, who represents the Global Athlete advocacy group.

CAS did, indeed, conclude that Russia did everything it was accused of — violations that prompted WADA to hand down the initial four-year penalty after its investigations wrapped up last December.

But the highest court in international sports did not release its entire 186-page decision, which would shed light on its reasons for cutting the sanction in half. It offered a statement from the arbitrators, who said they “considered matters of proportionality and, in particular, the need to effect cultural change and encourage the next generation of Russian athletes to participate in clean international sport.”

Leaders of the Olympic movement have been hoping for “cultural change” in the Russian sports system for years now, but any sense that it was occurring suffered a massive setback in the incident that led to the case that CAS considered.

It centered around Russia's promise to give WADA access to more than 23 million megabytes of digital files that would help detail and prosecute some of the doping violations that stemmed from the country's widespread cheating scheme that began early in the 2010s.

But when WADA finally got access to the files — in January 2019, long after many of the reforms and institutional cleanup were supposedly well underway — it found that Russian authorities were busy right up to the deadline scrubbing and altering those files.

WADA's four-year sanction was less draconian than it could've been but still booted most Russian dignitaries along with the country's flag, though not all its athletes, from the Olympics.

Russia appealed, and CAS responded by cutting the length of the sanction in half — a period that will still include the Tokyo and Beijing Olympics — while loosening some of the key restrictions. For instance, Russian government officials, all the way up to President Vladimir Putin, cannot be banned from an event if they've been invited by a leader of a host country. No one can prevent Russian flags from flying in the stands. CAS glossed over a robust vetting system that was to be used to figure out which athletes can be deemed clean and, thus, allowed to participate. And athletes who are allowed in the games will have the name “Russia” on their uniforms.

Russian synchronized swimming coach Tatyana Pokrovskaya summed up the effect of the new set of sanctions in an interview with Tass: “When the Russians are standing on the top step of the podium, everyone will know that they are Russians,” she said. “And probably several athletes will be singing the anthem,” which is banned from being played.

While Russian authorities branded this a victory, WADA played both sides: President Witold Banka said the agency “is pleased to have won this landmark case,” but also that WADA was “disappointed that the CAS Panel did not endorse each and every one of our recommended consequences for the four-year period we requested.”

The IOC, which undercut a WADA recommendation for a full Russian ban at the 2016 Olympics, said only that it had “taken note” of the decision and would consult with its key federations.

“I don't see how this, in any way, would deter other countries from participating in this kind of corruption,” Walden said.

Paralympian Ali Jawad said calling the sanction a “ban” is an inaccurate portrayal of the CAS decision, given that Russian athletes and Russian dignitaries, including the country's IOC members, will still be allowed at the Olympics.

“If that was an athlete breaking the rules the way Russia did, it would be a lifetime ban, easily,” Jawad said. “Russia has gotten off very, very lightly.”

No argument there from Moscow.

“It is a victory for Russia,” said Mikhail Bukhanov, the acting CEO of RUSADA.