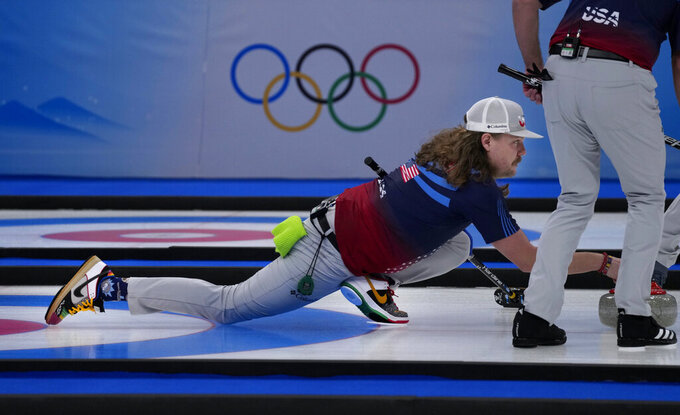 BEIJING (AP) — The only things louder than the shouting in the Olympic curling venue are the shoes that Matt Hamilton brought with him to Beijing.

The mustachioed American is representing the red, white and blue in a pair of Nikes that feature virtually every color under the sun. According to the company’s website, the non-matching shoes have “ornate embroidery, wild prints, colorful gradients and a range of premium textures blending to turn familiar features into something entirely new.”

Hamilton is a bit of a sneakerhead, so some friends bought him a pair from the collection of skateboarding champion Paul Rodriguez. They were converted to curling shoes by attaching a gripper on one sole and a slider on the other.

“I just thought they’re sweet,” Hamilton said before the Americans opened their gold medal defense with a round-robin match against the Russians. “Here we are with some wild shoes.”

Although curlers tend to be more of the soft-spoken type, Hamilton stood out during the Pyeongchang Games with his bushy mustache and outgoing personality. As the second on John Shuster’s team, he helped the United States survive five straight elimination matches to win the gold medal.

In Beijing, his shoes help fill the sartorial gap left behind by the disbanding of Norway's Team Ulsrud, which gained fame for its outlandish pants over three Olympics. Steffen Walstad’s foursome is representing Norway in 2022, opening the Beijing Games against Switzerland in the Ice Cube venue one sheet over from the Americans.

And their pants were solid black.