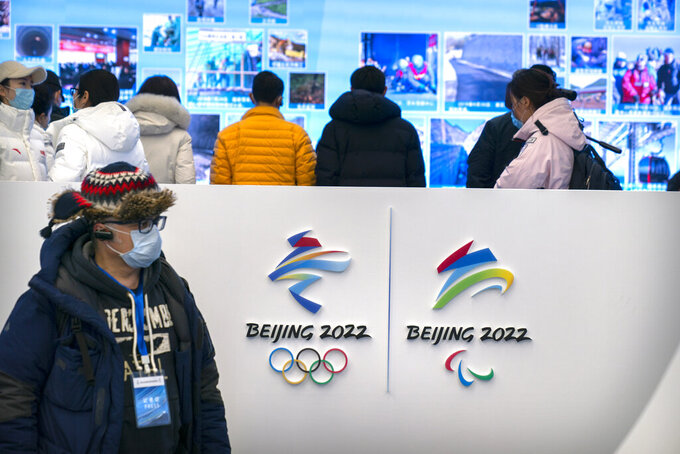 A journalist wearing a face mask to protect against the spread of the coronavirus looks at an exhibit at a visitors center at the Winter Olympic venues in Yanqing on the outskirts of Beijing, Friday, Feb. 5, 2021. Beijing Olympic organizers showed off the downhill skiing venue and the world's longest bobsled and luge track Friday, one year ahead of the scheduled opening of the 2022 Olympic Winter Games. (AP Photo/Mark Schiefelbein)

BEIJING (AP) — Beijing Olympic organizers showed off the downhill skiing venue and the world’s longest bobsled and luge track on Friday, one year ahead of the scheduled opening of the 2022 Winter Games.

A new and still bumpy road wound up to the venues, carved and built into the side of 2,198-meter (7,250-foot) Haito mountain northwest of central Beijing.

Officials sounded confident the games would go on, despite the COVID-19 pandemic that is still raging in much of the world.

Xu Zhijun, deputy secretary general of the organizing committee, pledged a safe Olympics and said that construction of the competition venues was completed by the end of 2020 despite the pandemic.

Work continues on the athlete housing and other facilities. Tree saplings, braced with poles, stood outside the sliding center that will host bobsled, luge and the skeleton.

The 1.9-kilometer (1.2-mile) track will make the competitions 100 to 300 meters (350 to 1,000 feet) longer than others, depending on the race. It is open-air but covered with a wooden roof built in a traditional Chinese style.

The Beijing Games have been dogged by activist calls to boycott or move them out of China because of the government’s harsh crackdowns on ethnic groups in Xinjiang and Tibet and on a democracy movement in Hong Kong.

The International Olympic Committee has largely ignored the demands. IOC President Thomas Bach last week called the preparations for the Beijing Games “almost a miracle” despite the challenges of the pandemic.