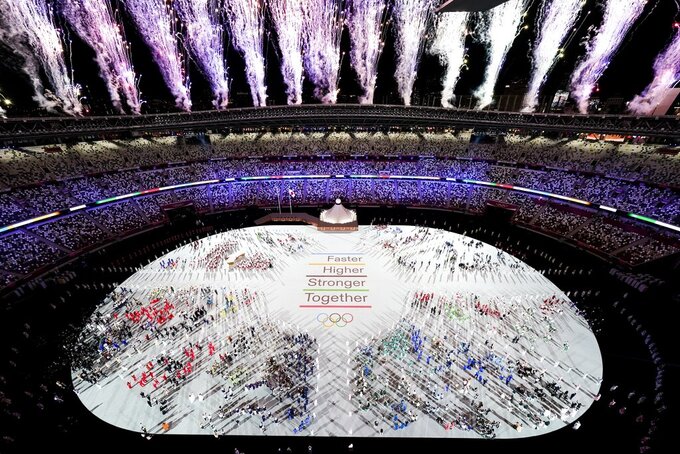 Athletes are seen with fireworks during the opening ceremony at the Olympic Stadium at the 2020 Summer Olympics, Friday, July 23, 2021, in Tokyo. (AP Photo/Morry Gash)

TOKYO (AP) — The 2020 Olympics officially opened Friday with a barrage of fireworks, nods to Japan’s history and culture, and a mesmerizing drone display over Tokyo’s night sky.

And, of course, without fans there to see it.

The pomp of these games is unlikely to escape its circumstance — namely, that the quadrennial event is being staged a year late, in front of empty grandstands, against the will of many in Japan and at the risk of infection for those involved.

Athletes paraded into Tokyo’s National Stadium on Friday night, cheered only by competitors or by the performers lining their route. Hard to find familiar faces beneath all their facemasks, but shirtless, glistening Pita Taufatofua stood out again while carrying Tonga's flag for the third time.

Fireworks erupted off the arena’s roof and music blared from its loudspeakers, but the tone for much of the ceremony was somber, including during an opening number when performers mimicked athletes training in isolation. The mood lightened later, including for jazz pianist Hiromi’s dazzling fast fingers.

Tennis star Naomi Osaka concluded the ceremony by lighting the Olympic cauldron atop a peak inspired by Mount Fuji.