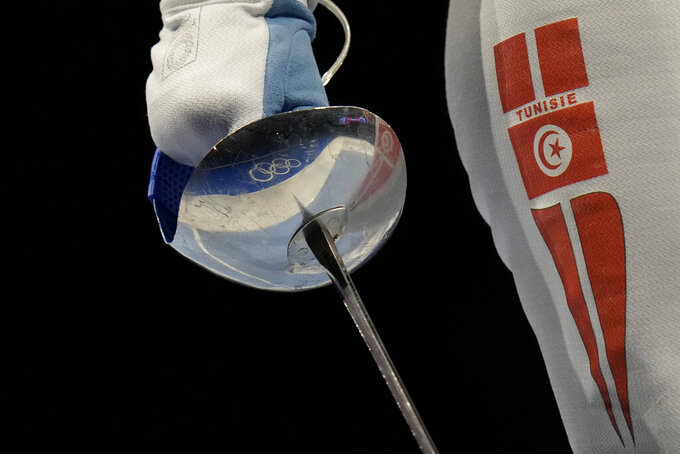 The Olympic rings are reflected on Sabre weapon of Olfa Hezami of Tunisia as competes with Norika Tamura of Japan in the women's Sabre team round of 16 competition at the 2020 Summer Olympics, Saturday, July 31, 2021, in Chiba, Japan. (AP Photo/Hassan Ammar)

TOKYO (AP) — In case any golfers at Kasumigaseki Country Club forgot this men's tournament differed from a normal PGA Tour stop, 18 sets of reminders awaited them — a pair at the start of each hole.

Five interlocking circles — representing the five continents with Olympic competitors — multicolored and ubiquitous at the Games.

As recognizable a logo as any.

It's used as a tee box marker for the men's and women's golf tournament. On the plastic casing supporting the net at volleyball. As a backdrop for Aussie BMX freestylist Logan Martin's backflips.

And of course, on the gold medal won by American gymnast Sunisa Lee in the women's all-around.

They aren't just a photo op for The Associated Press, either. Athletes have stopped for posed shots in front of rings in the Olympic Village and at venues. Germany's Hannah Kuechler was spotted in a pink swimsuit standing in front of rings at Tokyo Aquatics Center while another swimmer captured the moment.