Aussies curlers out of Olympics, back in, then win 1st game 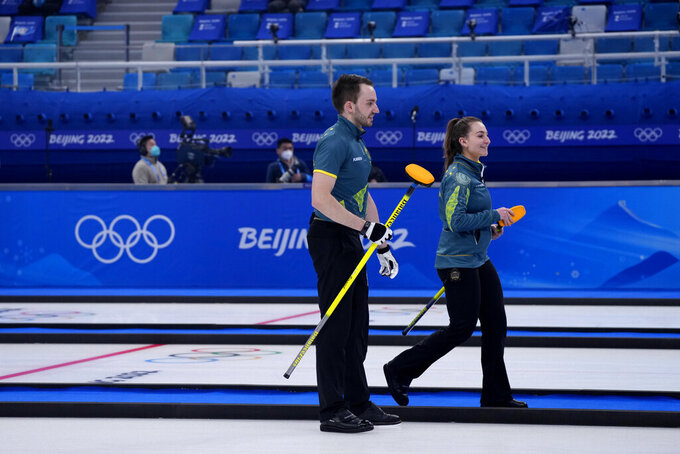 BEIJING (AP) — After getting a devastating morning phone call that she had tested positive for COVID-19, Tahli Gill and her Australian mixed doubles curling teammate Dean Hewitt were out of the Beijing Olympics.

A few hours later, another call. They were back in.

They barely had enough time to grab their uniforms out of their packed bags — a flight home had been booked for Monday — jump in a cab and get from the Olympic Village to the Ice Cube for a game against Switzerland.

Highlighting a day they’ll never forget, Gill threw the takeout shot that resulted in a three-ender, or three points, that tied the game at 6 in the sixth end. The Aussies won 9-6 for their first victory after opening their first Olympics with seven straight losses.

They fist-bumped Swiss curlers Martin Rios and Jenny Perret, hugged each other and then waved to a spectator who occasionally had yelled, “Aussie, Aussie, Aussie!” in the mostly empty arena.

“You know what? They just experienced the COVID Olympics 101 right there,” said the Aussie duo’s coach, defending mixed doubles gold medalist John Morris of Canada. “I’m sure it was a really tough time for Tahli. I was heartbroken for her when I heard they were out. I’m absolutely ecstatic they’re still playing in this.”

Coincidentally, the Aussies’ final game of the Olympics was Sunday night against Morris and his new partner, Rachel Homan. The Aussies blew a 7-0 lead but won 10-8 in an extra end.

Also Sunday night, Chris Plys and Vicky Persinger of the United States were eliminated from playoff contention after a 6-5 loss to Switzerland. The top four teams advance to the semifinals Monday night, following the final session of the round robin. Italy, already qualified for the playoffs, improved to 8-0 with a 12-8 win against Sweden.

The Australian Olympic Committee announced late Sunday morning that Gill returned a series of positive tests the night before and that rather than having her go into an isolation hotel, she and Hewitt would be heading home.

But the AOC continued to press her case, and shortly before the scheduled game time of 2:05 p.m., it announced that the medical expert panel examined Gill’s CT values —considered an indicator of how much virus an infected person is carrying — following PCR testing during the previous 24 hours and determined that they fell into an acceptable range. With that, the Aussies were back in.

Gill had COVID-19 before the Olympics and had been allowed to compete under the close contact program, at least until the positive tests late Saturday.

“It’s just been the craziest time,” Gill said. “It was down to the wire, pretty much. The medical team, they were able to review it. I’m so grateful that they put forward a good case. It just shows I’m not infectious.”

After getting cleared to play, it was such a scramble digging through her luggage, literally ripping out clothes to get to her uniform, that Gill grabbed the wrong glove.

“It was really crazy, but I think the fact that we were able to regroup, refocus and pull it off is really cool, and definitely something we’re going to take as a learning development going forward," she said. “It’s just been the most amazing experience.”

Gill and Hewitt were the first Australian curlers to qualify for the Olympics.

“You don’t realize what you’ve got until it’s gone,” Hewitt said. “Once we heard that we actually could play again, it made it extra special for us. Embrace the Olympics, embrace what we had and be grateful for it because it’s something that can be taken away from you at a moment’s notice. We’re so stoked and we can’t wait for our next game as well.”

Rios said the Swiss found out just before getting on the bus to the Ice Cube that Gill had tested positive.

“Now we have two years of experience with the epidemic, so it’s back to unexpected,” he said.

Curlers are known for their camaraderie and sportsmanship. Rios said he was glad the game was played and that they didn’t have to accept a forfeit win.

“We showed up here and there was no official forfeit. I prefer a deserved loss to a forfeit win, to be honest,” Rios said. “They are nice guys and I hope they’re well and can enjoy the rest of this. They’re good curlers. Of course, they were 0-7, but we knew they would give us a hard time on the ice.”

The Swiss had a three-ender in the fourth end for a 4-3 lead but couldn’t hold on.

“They fought back and in the end we were not able to fight back again," Rios said, "and so they deserved to win.”