Australia faces US in bid for 1st women's soccer medal 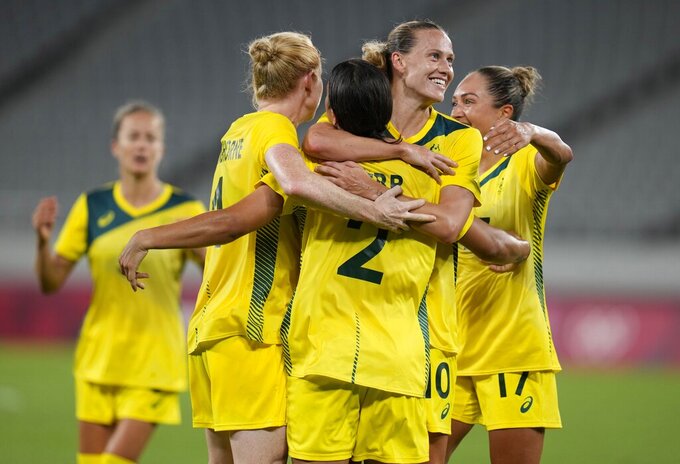 Australia's Sam Kerr (2) celebrates with her teammates after scoring her side's 2nd goal during a women's soccer match against New Zealand at the 2020 Summer Olympics, Wednesday, July 21, 2021, in Tokyo. (AP Photo/Ricardo Mazalan)

The Australians have reached the medal round for the first time ever at an Olympics. They'll face the United States in Kashima on Thursday for the bronze medal.

The Matildas have no intention of going home empty-handed in the team's bid for a medal.

“Unless we go home with something around our neck, it’s going to be a disappointment for us,” forward Sam Kerr told reporters.

The Australians have an added incentive: They're gearing up as co-hosts of the 2023 Women's World Cup. A medal — no matter the color — elevates the team in advance of the tournament.

The Americans, meanwhile, are hoping to salvage what has largely been a disappointing tournament.

“I think what we’ve done good in this tournament is focus on ourselves. We can't control where the U.S. is coming from or how they’re feeling. We’re focused on working on ourselves," Matildas coach Tony Gustavsson said.

“We’ve said from Day One that and we believe in the process of getting one day better, and then the results take care of themselves.”

The Australians have already met the United States at these Olympics, holding the Americans to a scoreless draw in the final game of the group stage. Australia was also the only team to score on the Swedes, who are headed for the gold medal match Friday against Canada.

After getting past Britain 4-3 in the quarterfinals, Australia met Sweden again in the semifinals, this time losing 1-0.

Kerr, who is the top scorer still playing in the tournament with five goals, said legs are heavy at this point in the tournament, "but we get a buzz from there being a medal at stake. I’ll be ready come USA.”

The Matildas are the underdogs to the United States, the top-ranked team in the world and the defending World Cup champions.

But the United States has struggled at times during the tournament, the most recent example being the 1-0 loss to the Canadians in the semifinals. Canada hadn't beaten the Americans since 2001.

U.S. coach Vlatko Andonovski was asked by reporters if the Australians have more to play for on Thursday.

“We were aiming for gold and we will always aim for gold, and that will never change, whether I’m in this spot or any coach, these players or any players. That has always been the goal for the team and will always be," Andonovski said.

“But just because it didn’t happen doesn’t mean that it stops there. We’re going to go into every game to win. And at the end of the day, it’s a medal in the Olympics, we’re gonna do anything possible to win.”

The U.S. team opened the tournament with a 3-0 loss to Sweden, snapping a 44-match unbeaten streak. After a rebound victory over New Zealand came the draw with Australia.

The Americans advanced 4-2 on penalties after a tough 2-2 draw with the Netherlands in the quarterfinals.

But they were thwarted in a quest for a fifth overall gold medal by their North American rivals. Jessie Fleming scored on a penalty kick in the 74th minute for the game's lone goal.

The loss cost the Americans more than a gold: Goalkeeper Alyssa Naeher injured her right knee and won't be available for the final match.

Naeher's backup in Tokyo, Adrianna Franch, said no matter the medal, the United States is still playing to win in Japan.

“We didn’t make it for the gold or the silver, but the bronze is just as important, because it’s what we have to fight for.”