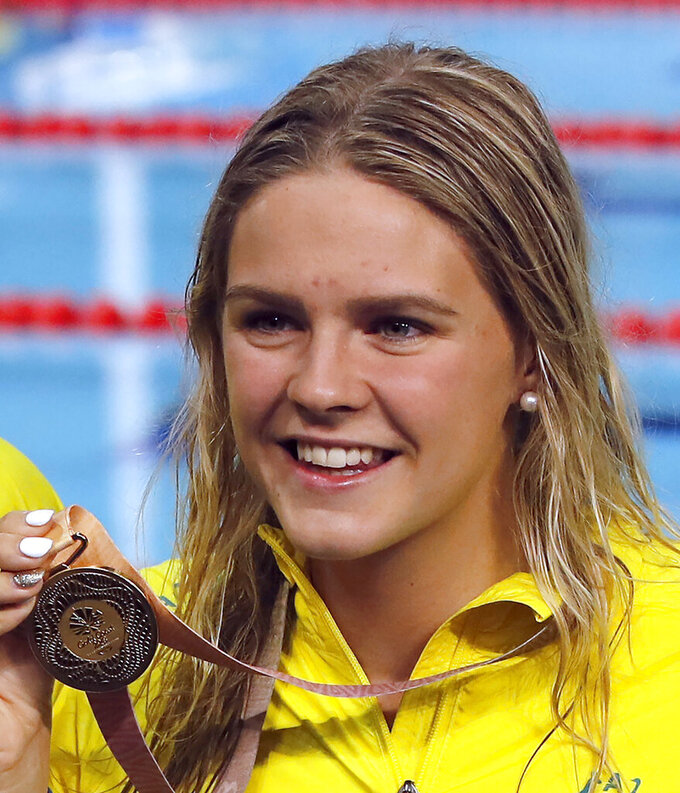 FILE - In this file photo dated Thursday, April 5, 2018, Australia's gold medal women's 4x100 freestyle relay team member Shayna Jack, poses with her medal at the Aquatic Centre during the 2018 Commonwealth Games on the Gold Coast, Australia. The Court of Arbitration for Sport said Monday Nov. 16, 2020, Australian swimmer Shayna Jack has been found guilty of accidental doping and was given a two-year ban that expires days before the Tokyo Olympics starts. (AP Photo/Mark Schiefelbein, FILE)

LAUSANNE, Switzerland (AP) — Australian swimmer Shayna Jack was banned for two years on Monday for accidental doping, with her sanction expiring days before the start of the Tokyo Olympics.

The Court of Arbitration for Sport said its judge decided “Jack did not intentionally ingest ligandrol and considered that she had discharged her onus of proving that the anti-doping rule violation was not intentional.”

Jack tested positive for the anabolic agent ahead of the 2019 world championships. An Australian sports tribunal previously recommended a four-year ban before CAS took on the case.

“INNOCENT,” Jack wrote in a post on her Instagram account. “I have proven that I have NOT ever cheated, nor used prohibited substances intentionally or knowingly. ... Therefore, I accept this decision with a positive attitude and with gratitude that my career as a swimmer will resume next year.”

An appeal is now possible to a separate CAS panel. The World Anti-Doping Agency can choose to file a case seeking a longer ban.

The 22-year-old swimmer, a four-time medalist in relays at the 2017 world championships, cannot compete through July 11, 2021. The Tokyo Olympics open less than two weeks later.

Jack denied doping and said the positive test was caused by a contaminated supplement. The burden of proof is on athletes in anti-doping cases to show exactly how and when any contamination happened.

Jack tested positive in an out-of-competition test in June 2019. The freestyle specialist was suspended from the Australian team and sent home from its pre-worlds training camp in Japan.

At the time, the Australian team said the case was “bitterly disappointing and embarrassing.”

Australian swimming was criticized when, days after the Jack case was revealed, freestyle swimmer Mack Horton refused to share the world championship podium with Sun Yang because of his concern about doping allegations. The Chinese swimmer was banned for eight years by CAS in February.

Jack on Monday said she “never doubted myself for a minute throughout this ordeal and I have never allowed my integrity to be compromised.”

Swimming Australia issued a statement early Tuesday to welcome the CAS verdict, and also to call for empathy for the athlete.

“The approach to anti-doping is deliberately strong and needs to be ... we have a zero tolerance approach to doping and always will,” Swimming Australia said. “However, this does not mean that we cannot demonstrate care and empathy for young people who are part of our community, who are thrust into a complex system that can be overwhelming, often confusing and confronting.

“Shayna is a young and driven athlete and we hope the outcome of the hearing enables her to move forward after a difficult period.”