Australia's hopes for Olympic gold vanish against the US 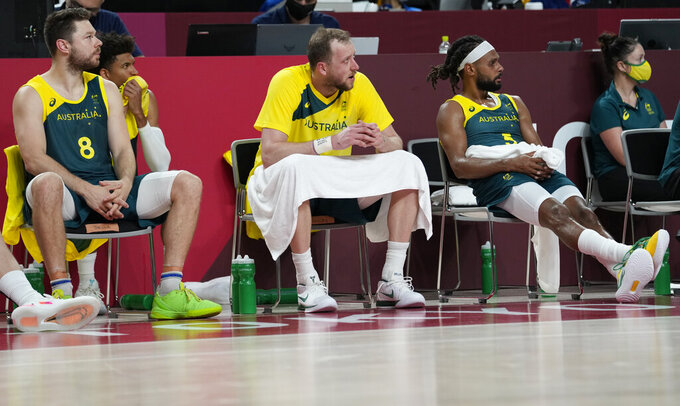 Australia players watch from the bench during men's basketball semifinal game between the United States and Australia at the 2020 Summer Olympics, Thursday, Aug. 5, 2021, in Saitama, Japan. (AP Photo/Eric Gay)

SAITAMA, Japan (AP) — Gregg Popovich wrapped his arms around Australia's Patty Mills when it was over, and even the coach of the U.S. team was struck by how the losing team must have been feeling at the final buzzer.

A medal was in Australia's hands. That is, until it wasn’t, in what has become an all-too-familiar refrain for the Boomers' program. They took a 15-point lead and watched helplessly as it became a 23-point deficit at the hands of the U.S., on the way to what became a 97-78 loss to the Americans in the semifinals at the Tokyo Olympics on Thursday.

“I’m thrilled with the victory, obviously,” Popovich said. “But when I looked him in the eyes, I felt badly because they do have great camaraderie and great history and culture — and they wanted this just as badly as any of us, so that was a little bit sad. But that’s all we all do, right? We all try to win.”

The embrace ended, and with that, Popovich and Mills were headed in different directions on multiple fronts. Popovich is going to the gold-medal game, Mills is going to the bronze-medal matchup and then leaving San Antonio — where he played for Popovich for a decade and was the last player left from the Spurs’ most recent NBA title team in 2014 — for Brooklyn as a free agent.

“We'll miss him a great deal," Popovich said. “But I think it's a good move for him."

Mills has refused to address the specifics of free agency publicly at the Tokyo Games, saying he would not do anything to take the focus off his primary goal, that bringing gold to Australia.

In the end, the Boomers weren't close.

Australia is now 0-11 in games all-time when it can clinch a medal at either the World Cup (formerly the world championships) or the Olympics. And this Australian core that has been together forever — Mills, Joe Ingles, Matthew Dellavedova among the principals — might not still be together in two years for the World Cup that’ll end in Manila or the Paris Olympics in 2024.

This was their chance. Thursday might have been their best chance. It vanished in an instant.

They’ve been a bit closer in a couple of the bronze-medal games: those losses were by 1, 6, 18 and 29 points. But this loss had to bring back reminders of the 2019 World Cup, where Australia had a 15-point lead — same margin as Thursday — in the bronze-medal game against France and let it slip away and then some in an all-out collapse.

Midway through the second quarter, it was Australia 41, U.S. 26.

Early in the fourth quarter, it was U.S. 84, Australia 61. That represents a 58-20 run in a span of about 18 minutes. Australia beat the Americans in an exhibition in 2019, beat them again in another one last month in Las Vegas, but is now 0-16 against the U.S. men in FIBA competitions.

“In the second half, defensively, offensively, we just couldn’t find a groove,” Australia’s Matisse Thybulle said. “And they found theirs.”

Now comes the less-than-easy task of regrouping. The bronze game is another opportunity.