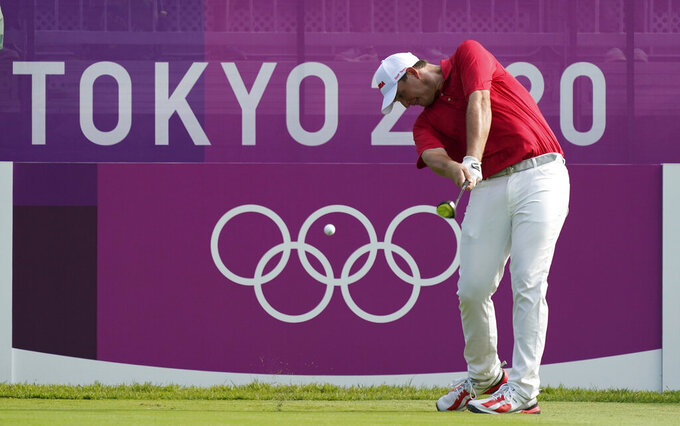 Austria's Sepp Straka hits a tee shot on the first hole during the first round of the men's golf event at the 2020 Summer Olympics on Wednesday, July 28, 2021, at the Kasumigaseki Country Club in Kawagoe, Japan. (AP Photo/Matt York)

KAWAGOE, Japan (AP) — Golf is among the hardest sports to predict, and the Olympics is no exception.

How else to explain Sepp Straka?

Austrian-born and American-groomed, he had missed the cut in six of his last seven starts on the PGA Tour. Straka didn't arrive until Tuesday to make sure his required COVID-19 tests were in order. And then he couldn't seem to miss a shot at Kasumigaseki Country Club, tying an Olympic record with an 8-under 63 to take the 18-hole lead.

“If you just put it in the fairway, you can really take advantage,” Straka said. “And I got hot with my irons, especially my short irons and wedges. I was really knocking down the flag stick and really tried to stay aggressive with those.”

The red shirt he wore for the opening round was appropriate. It's the team color of his native Austria and the Georgia Bulldogs, his alma mater.

Straka identifies easily with both.

His mother is an American who traveled to Austria with a boyfriend and stuck around when the relationship ended. She was working in a pro shop in Salzberg when she sold a golf glove to a customer whom she eventually married.

They became parents of twins — Sepp (full name Josef) and Sam — and they were raised in Austria until his mother wanted to be closer to home. When he was 14, Straka moved from Vienna to Valdosta, Georgia.

He is No. 161 in the world and wouldn't be at the Tokyo Olympics except that Bernd Wiesberger, the highest-ranked Austrian at No. 62 in the world, chose not to play. That spot went to Straka, a 28-year-old whose only victory so far was on the Korn Ferry Tour three years ago.

But that red shirt is all about his native country this week.

This is not his first time playing under the Austrian flag.

Even living in the U.S. and preparing for college, he went back to play for the Austrian team that finished second in the European Boys Team Championship in 2011. The winner was Spain, led by a big kid from the Basque region named Jon Rahm.

Straka turned pro in 2016, the year golf returned to the Olympics after a century-long absence. As an Austrian native, it got his attention.

“I wasn't close to qualifying back then but I was watching and it was seemed like a cool event, and everybody that I knew that went over there and played just raved about it,” he said. “So I knew at that point that was going to be on my radar and definitely wanted to play well so I could play my way in.”

It was a dream start. After four birdies on the front nine, Straka surged into the lead with three straight birdies, which started with a big drive to 70 yards on the 400-yard 13th hole that left him a flip wedge to 10 feet. He got up-and-down from a bunker on the par-5 14th, and hit another wedge into 5 feet on the 15th.

Straka picked up one last birdie with a tee shot to 7 feet on the par-3 17th.

His record-tying 63 — Marcus Fraser of Australia also shot 63 in the opening round at Rio de Janeiro in 2016 — was only part of it. Straka decided to bring his paternal twin, Sam, to be his caddie.

“It was a dream come true for us to be out there together and we had a blast out there,” Straka said. “It was a day that will be in my memory forever.”