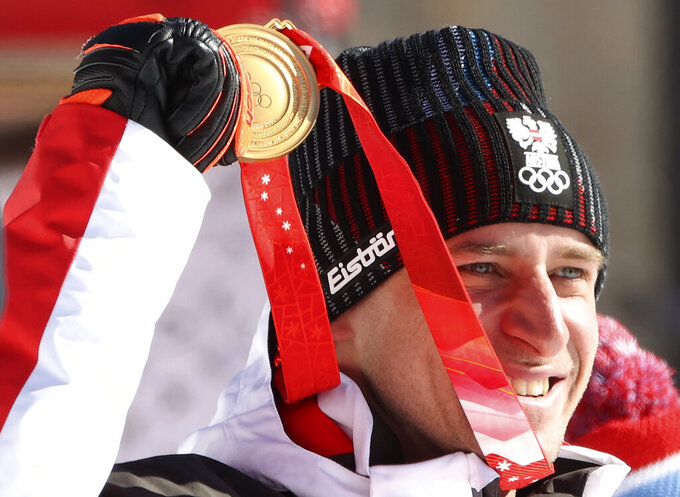 Matthias Mayer of Austria celebrates with his gold medal during the medal ceremony for the men's super-G at the 2022 Winter Olympics, Tuesday, Feb. 8, 2022, in the Yanqing district of Beijing. (AP Photo/Alessandro Trovati) 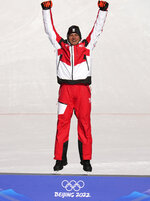 BEIJING (AP) — Matthias Mayer stuck his poles into the snow, pushed off with his massive legs and attempted to head down the mountain. At least that's where he thought he was going — until one of the Austrian skier's poles got held up, with the countdown clock ominously winding down.

"It was stuck in an aluminum thing and I had to push it out and I got (pushed) back and (did) it again,” Mayer said.

Certainly not the ideal way for the defending champion to begin an Olympic super-G — where the difference between first and second would be only a few hundredths of a second.

Mayer, however, quickly shook it off, and was on his way toward becoming the first man to win gold medals in Alpine skiing at three straight Olympics.

“It was a little bit (of) a nervous start," he said. "But after the first gate I didn’t (think about) that.”

That unflappable ability to focus on the task at hand without being distracted by all the other things that can happen during a ski race is one of the big reasons why Mayer is so successful when it counts most.

For Mayer, you see, it's all just a game.

“It’s the Olympic Games, so my mindset was about the games. ... playing this game," he said. "I was very focused today and very free in my mind.”

Mayer also won the super-G at the 2018 Pyeongchang Games and the downhill at the 2014 Sochi Olympics, which makes him what they call back home in Austria a “Dreifach-Olympiasieger” — three-time Olympic champion.

Italian racer Christof Innerhofer, who came into the Olympics as one of the most experienced speed skiers on the professional circuit, failed to finish both the downhill and super-G. But he was impressed by what he saw, and keeps seeing, from Mayer.

“He’s always super calm," said Innerhofer, who has won five medals between the Olympics and world championships. "Then when he gets in the start house, he goes all out; he doesn’t think about hundredths or the results — he skis and he likes to ski when he’s pushing.

After his stutter at the start, Mayer was only sixth-fastest through the first checkpoint on The Rock course. But he mastered the narrow and technical layout the rest of the way down and finished a mere 0.04 seconds ahead of the next starter, first-time medalist Ryan Cochran-Siegle of the United States.

Cochran-Siegle’s medal came almost 50 years to the day after his mother, Barbara Ann, won gold in the slalom at the 1972 Sapporo Games.

“When I’m skiing my best, I can go out and contend with the rest,” Cochran-Siegle said. “Some people say how second place is hard. This was the best second place that I’ll ever get in my life.”

The American wasn't the only skier on the podium with an Olympic medalist as a parent. Mayer's father, Helmut, won a silver in the first Olympic super-G at the 1988 Calgary Games.

Mayer, who also won a bronze in downhill on Monday, became only the third male skier to successfully defend an Olympic title after Kjetil Andre Aamodt also won two straight super-G gold medals, in 2002 and 2006; and Alberto Tomba, who did it in giant slalom in 1988 and 1992.

“It’s unbelievable to make it happen on the days where it counts the most,” said Kjetil Jansrud, a Norwegian rival with five Olympic medals of his own.

So where on the course did Mayer ski more smoothly than Cochran-Siegle to earn those precious four hundredths?

“I think in the middle section," Mayer said. "He did a few times when he got out of his tuck and I didn’t do that.”

Kilde was seventh to start and was ecstatic when he crossed the line and saw he had beaten the time set by the previous leader — Alexis Pinturault — by one second.

“I thought I was going to win, of course,” Kilde said with a laugh. "This third place is a victory for me.”

Indeed, for a skier who had won virtually everything in the sport besides a medal at a major championship, Kilde can be relieved that he now has some hardware to take home.

Kilde was also a favorite for the downhill but finished fifth — on the same day when his girlfriend, Mikaela Shiffrin, fell during the first run of the giant slalom, her opening event.

“It was a tough day in general yesterday,” Kilde said. “It’s just about trying to think positive and look ahead.”

So is Shiffrin ready to move on, too, with her next race Wednesday in slalom?

“Yeah. She is mentally really strong,” Kilde said. “So she’ll be ready for tomorrow. But no pressure.”

Overall World Cup leader Marco Odermatt of Switzerland was among the favorites in the super-G but he lost control on a turn and went out shortly before the end of the course.

Meanwhile, it may have been the final Olympic race for the 36-year-old Jansrud, who finished more than three seconds behind in 23rd after rushing back from a knee injury for the Beijing Games.

“I wanted to really go with my heart and soul today," Jansrud said. "But the body doesn’t want to stay with the same tempo."