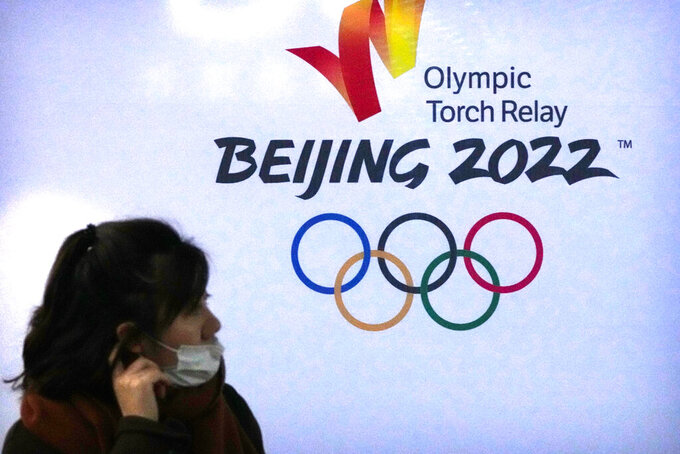 A woman wearing a face mask to protect against COVID-19 walks past the logo for the Beijing 2022 Winter Olympic Torch Relay during an event at the Beijing University of Posts and Communications in Beijing, Thursday, Dec. 9, 2021. Already roiled by the pandemic and a partial diplomatic boycott, the Beijing Winter Olympics face another challenge in finding airplane seats for all the athletes and officials. (AP Photo/Mark Schiefelbein)

BEIJING (AP) — Already roiled by the pandemic and a partial diplomatic boycott, the Beijing Winter Olympics face another challenge in finding airplane seats for all of the athletes and officials.

Ensuring the smooth arrival of participants has “become everyone’s concern” because of a reduction in regular passenger flights because of COVID-19, Zhang Liang, director of the organizing committee’s Arrival and Departure Center, said Friday.

The committee and civilian aviation authorities have “established the principle that chartered and temporary flights will be the main means, supplemented by commercial flights,” Zhang said at a media briefing.

He said 17 domestic and foreign carriers have signed on to provide temporary flights, adding 15 inbound flights departing from more than a dozen worldwide hubs every day, along with 13 outbound flights .

“The flight plans have been confirmed and the flight schedules have been released," Zhang said.

While China has largely controlled widespread virus infections since the pandemic began in the central city of Wuhan in late 2019, it has maintained a strict “zero-tolerance" approach on pandemic restrictions.

Zhang said participants should be fully vaccinated at least two weeks before their departure for Beijing and monitor their health daily. They also need to take two nucleic acid tests with 96 hours of boarding their flights and receive a green health code issued by the Chinese government showing they are virus-free. Another test will be administered when they arrive in Beijing, Zhang said.

After that, the athletes, officials and journalists will enter a closed-loop bubble for the duration of the Feb. 4-20 Games, which will take place at three far-flung locations in downtown Beijing, its suburb of Yanqing, and neighboring Hebei province. No spectators from outside China are being allowed.

The U.S., Britain, Canada and others have announced a diplomatic boycott under which they will not send government officials to the Games in protest over China’s treatment of Turkic Muslim Uyghurs and other minority groups, along with civil society and human rights activists. China has dismissed that as a futile gesture that violates the Olympic spirit, but has also vowed to retaliated.

Politicians, the WTA and leading tennis players have also raised concerns about the safety of three-time Olympian and former top-ranked doubles player Peng, who publicly accused Zhang Gaoli, a former member of the party’s Politburo Standing Committee of coercing her into sex three years ago. The WTA has suspended all of next year's events in China and Hong Kong in response.