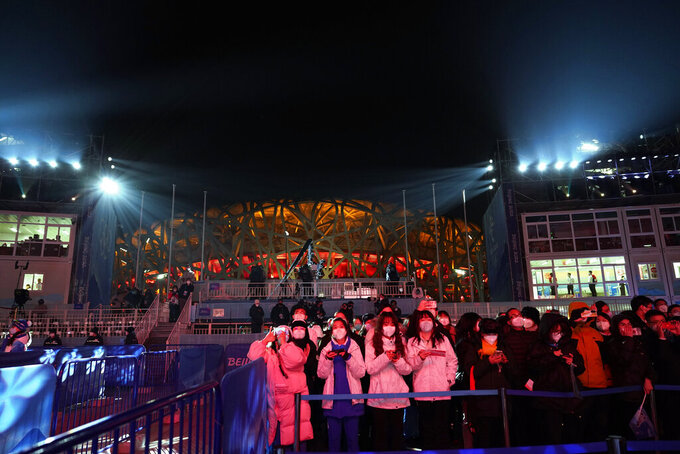 Spectators wait for the start of a medal ceremony at the 2022 Winter Olympics, Wednesday, Feb. 9, 2022, in Beijing. (AP Photo/Gerald Herbert)

BEIJING (AP) — Some local fans are getting to watch the Beijing Games in person, though it’s not clear exactly how they were selected for a visit inside the tightly controlled Olympic bubble.

As part of the strict measures intended to prevent the spread of COVID-19 at the Games, athletes, reporters and others are being limited to a “closed loop” of dedicated Olympic venues and hotels.

Plans to sell tickets to the general public were scrapped before the Games began. But organizers announced that about 150,000 local spectators including school children and foreign embassy staff would be allowed in some venues.

How they are selected is a bit of a mystery. Jiarong Yan, a representative for Beijing organizers, said they apply and are invited by community organizations, educational institutions and other groups. They're subject to protocols, including testing before they enter and health monitoring after they leave, but quarantining isn’t required. They are kept separate from others inside the bubble.

On Thursday, some fans sat spaced apart inside the Capital Indoor Stadium to watch the men's figure skating free skate. Cheers erupted for China's Jin Boyang and again when Nathan Chen of the U.S. delivered a free skate performance that won him the gold.