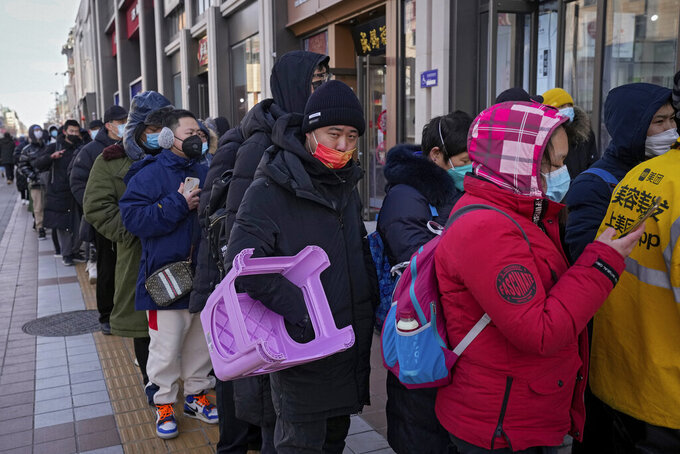 A man carries a plastic chair as he and hundreds of residents line up to visit a store selling 2022 Winter Olympics memorabilia in Beijing, Monday, Feb. 7, 2022. The race is on to snap up scarce 2022 Winter Olympics souvenirs. Dolls of mascot Bing Dwen Dwen, a panda in a winter coat, sold out after buyers waited in line overnight in freezing weather. (AP Photo/Andy Wong)

BEIJING (AP) — The race is on to snap up scarce 2022 Winter Olympic souvenirs, especially stuffed versions of Games mascot Bing Dwen Dwen, a panda clad in a spacesuit-like clear shell.

People showed up with stools Sunday to wait overnight in freezing temperatures outside Gongmei Emporium on the Wangfujing pedestrian mall in central Beijing. Some were from a mini-industry who are paid to stand in line to buy the latest smartphones and other consumer crazes for clients.

The pandas were sold out Monday at many locations, including at the Olympics facilities, where Chinese volunteers and foreign visitors lined up for hours.

Gongmei sold out of Bing Dwen Dwen toys in 30 minutes, said one woman who would give only her surname, Dong. She said she arrived 30 minutes before the store opened but failed to get one.

A sign in Gongmei’s window said it had 300 Bing Dwen Dwen figures and buyers were allowed one each. It promised more Tuesday.

In the Houhai neighborhood north of the Chinese capital’s center, a shop hung out a sign before 10 a.m. saying Bing Dwen Dwen souvenirs were sold out.

The Beijing Olympic organizing committee asked souvenir factories to make more, the official Xinhua News Agency reported. Many reopened this week after shutting down for two weeks or more during the Lunar New Year holiday.

Dong said she and three family members would take turns waiting in line through the night for Gongmei to open Tuesday.

At mid-afternoon, about 40 customers already were in line. Employees with bullhorns urged them not to stay overnight, when temperatures were forecast to fall to minus-6 degrees C (21 degrees F).

Wang Qianliang, 60, and his wife, visiting from Xi'an in western China, waited for two hours but failed to get a Bing Dwen Dwen. Wang said he would come back Tuesday.

“My child really wants to have one,” Wang said.

This story was first published on Feb. 8, 2022. It was updated on Feb. 9, 2022 to correct that Bing Dwen Dwen is wearing a clear shell that resembles a spacesuit, not a winter coat.