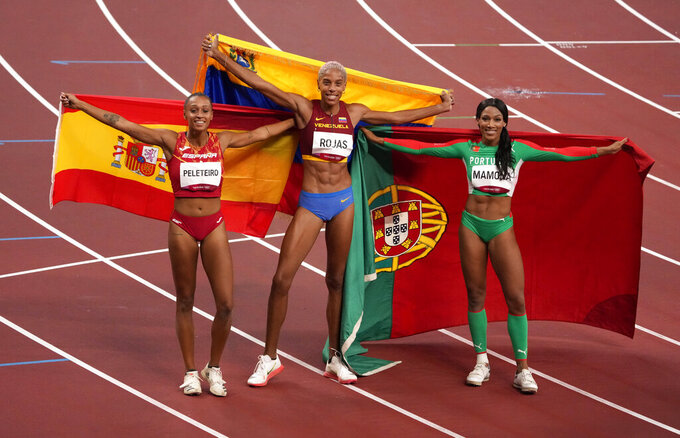 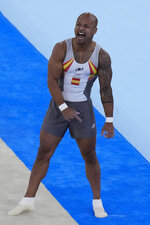 MADRID (AP) — Triple jumper Ana Peleteiro and gymnast Ray Zapata came out defending their Spanish roots after winning medals for their country at the Tokyo Olympics, with Peleteiro saying “a lot of people” back home were probably upset that two Black athletes succeeded.

Bronze medalist Peleteiro and silver medalist Zapata said they should be celebrated for succeeding while representing the country at the Games.

“It’s evidence of change, that this mix is very good, that it makes the country richer," Peleteiro told the newspaper El Mundo. “Anyone who doesn’t want to see that is a fool because there is nothing more beautiful than to mix two good things.”

In an earlier joint interview to Spain’s public broadcaster, RTVE, Zapata was talking about how they are “of color but represent Spain” when Peleteiro interrupted him and said, “We are Black, what do you mean ‘of color?’, they are the ones ‘of color,’ they change color more than the sun.”

“What do I know ... I feel extremely proud when I come out to represent Spain,” said Zapata, who was born in the Dominican Republic and moved to Spain at an early age.

Peleteiro was born in the northwestern Spanish region of Galicia. She complained in the past of being racially abused and of being told to “go back to your country” by someone on the street. She also had previously received abuse on social media.

“I think it shows that, whoever you are, when someone takes advantage of an opportunity, you have to celebrate it,” she said.

Peleteiro’s comments stirred a small political controversy on social media as many noted that politicians from some more radical parties congratulated other Spanish medalists but not Zapata and Peleteiro.

There were about a dozen Black athletes in the Spanish Olympic delegation of more than 320 athletes. Some represented the country despite being born outside of Spain.

Zapata won the silver medal on the individual floor exercise.