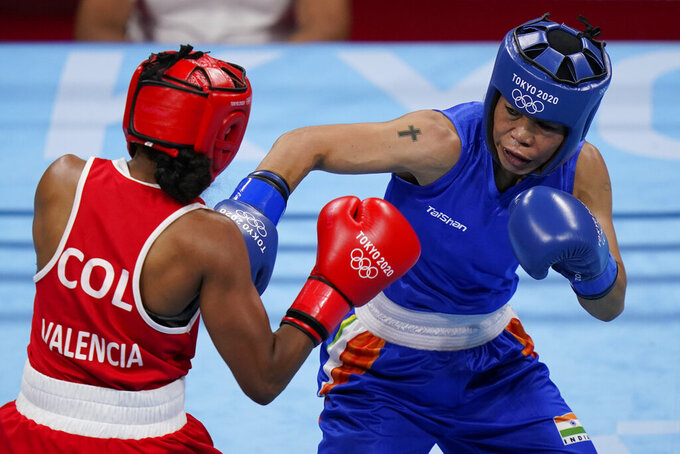 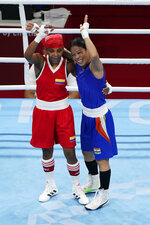 TOKYO (AP) — Although Indian boxer Mary Kom is out of her second Olympics after a narrow loss to Ingrit Valencia of Colombia, the 38-year-old trailblazer might not be done chasing her Olympic dreams.

Kom lost 3:2 to the third-seeded Valencia in the round of 16 on Thursday at the Kokugikan Arena despite winning the final two rounds on the majority of the judges' cards. A tentative first round went 4:1 to the 32-year-old Valencia, who hung on for the victory.

India’s underdog pugilistic hero was disappointed to be finished so soon in Tokyo, but Kom hasn’t ruled out going for a third Olympic berth three years from now if the age limit on boxers is raised.

“I’m still here,” Kom said, pointing to her heart. “I’m still strong enough. If you have it here, it’s still there.”

The irrepressibly optimistic Kom, who rose from a poverty-stricken Manipur childhood and defied her father's initial skepticism about boxing to become a six-time amateur world champion, reacted to her defeat with good sportsmanship and pragmatism.

“The first round was not much, but in the second and third round, I'm not waiting for her anymore,” Kom said. “I don't know what I think, but she is a very good fighter.”

Kom is a mother of four and a member of parliament, so she has more than enough to occupy her time when she isn't the subject of movies, books and television shows for her adoring fans. Although she had said she expected Tokyo to be her last Olympics, she didn't sound so certain in the immediate aftermath.

The international boxing association currently limits boxers to 40 years old in its competitions, but it's suspended for this Olympic cycle after years of problems. Even if the governing body is reinstated to run the Paris Olympics, it has expressed an openness to raising the age limit in the past, particularly if a celebrity fighter is interesting in pursuing an Olympic spot.

Kom will wait to see what is decided about the age limit before she confirms her future, but her movement and fast hands still appeared to be intact during her lively loss to Valencia.

Kom won her opening bout in Tokyo over Miguelina Hernandez of the Dominican Republic, but fell two victories short of clinching a second Olympic medal. Kom won bronze in London during the debut of women's Olympic boxing, creating yet another highlight in a career that took off with her first pinweight (45 kilograms) world championship as a 19-year-old prospect in 2002.

Kom didn’t qualify for Rio de Janeiro, but she persevered and made another comeback, even winning her sixth world title in 2018 before qualifying for Tokyo.

By Joe Reedy 26 minutes ago
By Anne M. Peterson 4 hrs ago
By Dave Skretta 7 hrs ago
By Samuel Petrequin 8 hrs ago
By Tim Reynolds 8 hrs ago