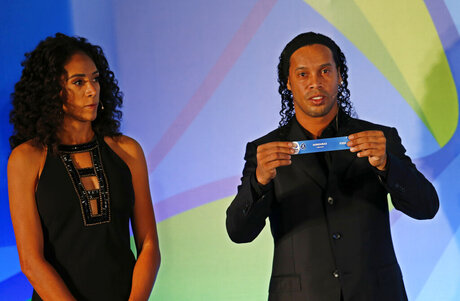 By: MAURICIO SAVARESE (AP)
RIO DE JANEIROCopyright 2020 The Associated Press. All rights reserved. This material may not be published, broadcast, rewritten or redistributed.
-22.9028-43.2075

Brazil lost to Mexico in the Olympic final four years ago in London.

The match is set for Aug. 4 in Brasilia, a day before the Olympics officially open in Rio de Janeiro. Iraq and Denmark are also in Group A.

In the draw on Thursday at Maracana Stadium, defending champion Mexico is in Group C with South Korea, Fiji, and Germany.

Japan is with Nigeria, Sweden and Colombia in Group B

Argentina, Honduras, Portugal, and Algeria are in Group D.

Brazil coach Dunga will be expected to win it all at home, and he knows it.

"It has to be this time," Dunga told Carlos Nuzman, the head of the Rio organizing committee.

"Brazil will always have pressure," Dunga added. "But we have a good group of players. Some that play in the Copa America will also be in the Olympics."

It's unclear if Neymar will play for Brazil. The Brazilian football confederation has requested he be available for the Copa America in June in the United States, and then the Olympics.

Barcelona has not indicated it will release him for both events.

Tickets sales have been lagging for the Olympics, and organizers hope the draw will encourage buying in a country where football dominates everything.

Brazil will also play the opening match in the women's tournament against China on Aug. 3 in Belo Horizonte. Sweden and South Africa are also in Group E.

The defending champion United States is in Group G with France, New Zealand, and Colombia.

Japan, the runner-up four years ago, did not qualify.