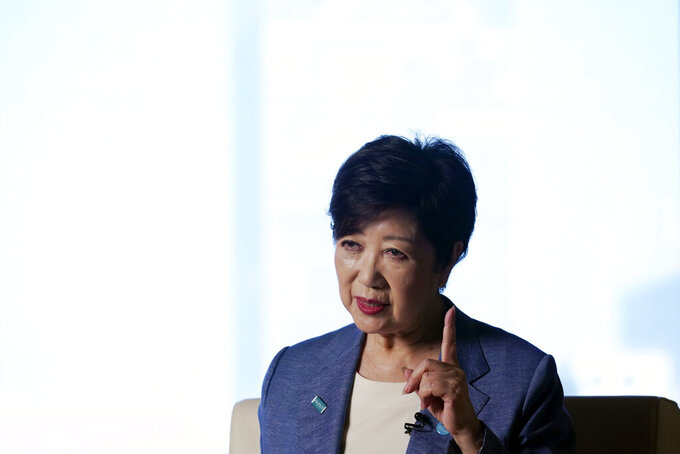 Tokyo Gov. Yuriko Koike speaks during an exclusive interview with The Associated Press at her office of the Tokyo Metropolitan Government Building in Tokyo Wednesday, June 17, 2020, ahead of a two-week campaigning for the election. A political go-getter, Koike even had the coronavirus crisis turn in her favor. And she repeatedly upstaged Prime Minister Shinzo Abe by taking more proactive steps ahead of him, gaining public support. Timing is also on her side now, she is cruising to a certain victory in the July 5 election for her second term as head of the Japanese capital. (AP Photo/Eugene Hoshiko)

TOKYO (AP) — The contentious issue of the billions being spent on the postponed Tokyo Olympics has entered the debate in the race for governor of Japan's capital.

Incumbent Yuriko Koike is a strong favorite to be reelected — and a strong supporter of the Olympics — in a field of more than a dozen candidates. The campaign officially opened Thursday.

Taro Yamamoto is a popular actor, turned politician who has entered the fray. He said in a debate this week that the Olympics should be called off and the billions redirected to help people struggling with the economic fallout from the coronavirus pandemic.

“The Olympics should be canceled,"Yamamoto told Koike. “There is no guarantee to hold the games safely in Tokyo, and we don’t have a vaccine yet" for COVID-19.

Yamamoto and others have warned about bringing in 11,000 Olympic athletes from 200 nations and territories, 4,400 Paralympians, and thousands more staff, technical officials, broadcasters and journalists. Add to this fans — if they are allowed — who have bought more than 4 million tickets, up to 80,000 volunteers, and questions about the need for quarantines.

"Tokyo will turn into a Petri dish by having so many people coming from around the world,” Yamamoto said. “We should notify the International Olympic Committee that Tokyo cannot hold the event safely.”

Another candidate, well-respected lawyer Kenji Utsunomiya, also supports calling off the Olympics based on the judgment of infectious disease experts. Two other candidates have proposed a 2- to 4-year postponement.

Koike, the International Olympic Committee, and local organizers say they are trying to scale back, downsize, and simplify the Tokyo Games, which have already been pushed back by 12 months. They've revealed no specifics so far, with hints about cutting back the opening and closing ceremonies, or the torch relay.

More questions than answers remain. Officials have said the events and athlete quotas will not be touched, and there is no talk of cancellation, with the Olympics set to open on July 23, 2021.

Soaring bills are an issue. Estimates in Japan say the one-year postponement will cost $2 billion to $6 billion. Koike has declined to give an official estimate, as have the IOC and the local organizing committee. They say it's too early to know, but Japan is slated to pay most of the costs.

“We must gain the understanding of the residents of Tokyo and citizens,” Koike said, referring to costs and the budget, in a separate interview with The Associated Press.

Overall, Tokyo says it's spending $12.6 billion to organize the Olympics, although a government audit last year said it was twice that much. All but $5.6 billion is public money.

Tokyo estimated the Olympics could cost $7.3 billion when the city was awarded the games in 2013.

"While many children and athletes are earnestly looking forward to the Olympics, we must keep the coronavirus under control, and the question is if a vaccine will be ready by then. It’s a race against time.” Koike said.

Koike, like the IOC, is betting the Olympics can be framed as a victory celebration over the pandemic, and the public will forget the tax bill.

“There are many issues to be resolved,” Koike said. “But when we have a major global goal and share it, and when it becomes a proof of victory in our fight against the coronavirus, what a meaningful event it will be.”