A century later, a lot riding on surfing's Olympic debut 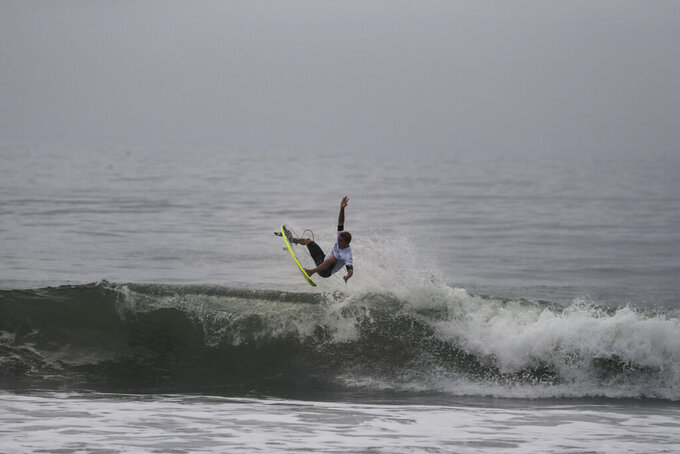 FILE - In this Thursday, July 18, 2019, file photo, a surfer competes during a test event at Tsurigasaki beach, a venue for surfing at the Tokyo 2020 Olympics, in Ichinomiya, Chiba prefecture, east of Tokyo. The International Surfing Association has been lobbying the International Olympic Committee since 1995, though the effort to include the sport dates back to the 1912 Summer Games in Stockholm. (AP Photo/Jae C. Hong, FIle)

SANTA CRUZ, Calif. (AP) — Surfing has a lot riding on its Olympic debut: a taste of the mainstream spotlight, athletic legitimacy for the uniquely four-dimensional sport, and, perhaps, some newfound respect so it can finally shake the stereotype as merely the pleasure pursuit of beach town himbos.

Acceptance been a century in the making. The International Surfing Association has been lobbying the International Olympic Committee since 1995, though the effort to include the sport dates back to the 1912 Summer Games in Stockholm.

That was when Duke Kahanamoku, the five-time medalist in swimming and Hawaiian icon revered as the godfather of modern surfing, first pushed for it to become an Olympic sport.

Back then, the act of stylishly riding an ocean wave on a board in competition was virtually unknown outside of his native Hawaii.

Surfing is a $10 billion industry, yet professional surfing, led by the World Surf League, largely remains niche and little understood. Surfing requires a well-rounded athleticism, including immense strength, agility, and grace to pull off maneuvers based on what the big, wild ocean delivers in the moment — think of the vagaries of the ocean as the fourth dimension in this sport many see as a spiritual pursuit. There’s hope now that the visually stunning sport will finally get its due with a mainstream audience at the Games, though some viewers may struggle to follow given the complexity and metrics of competition.

A DEBT TO HAWAII

The geopolitics of the Olympics will be on display when Carissa Moore and John John Florence are in the surf zone. They’re two of professional surfing’s biggest stars and both compete in the World Surf League under the Hawaii flag. They were both born and raised on O’ahu, and Moore is also ethnically part native Hawaiian. WSL’s decision to acknowledge Hawaii’s place in the surfing world and role in inventing the sport now runs counter to the IOC’s decision against the sovereignty movement’s longshot efforts for a Hawaii team.

It’s a full-circle kind of Olympic connection for Kanoa Igarashi, the 23-year-old Californian with dual Japanese citizenship who is representing Japan. He’s been surfing at the Olympic site, Tsurigasaki beach, his whole life and the location is deeply sentimental for his family. His father, Tsutomu Igarashi, a Japanese native who moved to the U.S. before Kanoa was born, said he helped popularize the waves there as a young surfer himself.

“At some point, it became the only place I surfed, so it’s so weird that the spot was chosen as an Olympic venue,” the elder Igarashi said in Japanese. “Sometimes, I feel like I used to surf there as if I knew that the Olympics were coming.”

Surfing is a sport that depends on many uncontrollable factors, including when, exactly, competitions will happen once the event period begins on July 25. Organizers generally monitor the waves with oceanography and atmospheric science data to decide if surf conditions -- wave height, wind direction, tidal movement -- are ideal for competition the day of, which means there is much potential for down time, known as lay days.

And even when the surfers get out into the lineup, the waves at Tsurigasaki may be disappointing for those expecting powerful surf conditions like those seen in the movies. This particular beach break is known for smaller waves and is not considered an extraordinary surfing competition site. There is hope, however: The Olympics are being held in peak typhoon season.

Kelly Slater, at 49 years old, is likely the oldest and most famous Olympic alternate. The 11-time world champion is surfing’s most decorated athlete and has the broadest mainstream appeal (lest we forget he starred as Jimmy Slade on the cult favorite television show “Baywatch”). There’s speculation that Slater may have a shot to shine in Japan, as the U.S. male qualifiers, Florence and Kolohe Andino, both have had significant injuries requiring surgery in recent months.

USA Surfing CEO Greg Cruse said it will be up to the qualifiers to decide, but that he hopes Slater will come to Japan as a standby, though the celebrity surfer has not yet committed to doing so. Aside from the injuries, there’s also concern that any given athlete may become exposed to COVID-19, which would trigger a government-mandated quarantine that could keep them out of the surf.