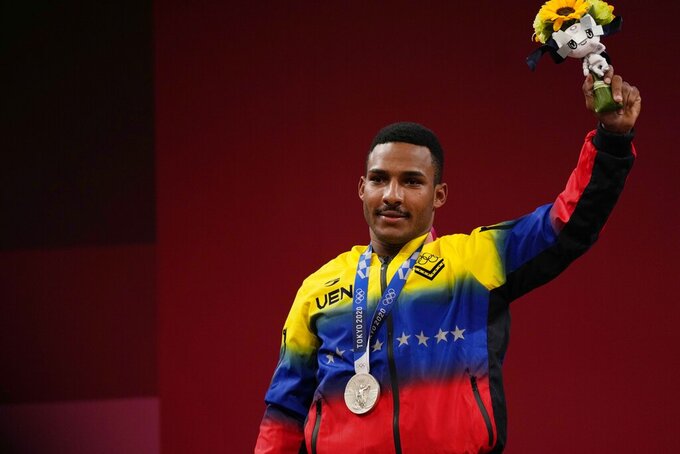 Julio Ruben Mayora Pernia of Venezuela celebrates on the podium after winning the silver medal in the men's 73kg weightlifting event, at the 2020 Summer Olympics, Wednesday, July 28, 2021, in Tokyo, Japan. (AP Photo/Luca Bruno)

He set the first weightlifting world record of the Tokyo Olympics as he easily won the gold in the men's 73-kilogram category Wednesday, and said victory alone wouldn't have satisfied him.

Shi lifted a total 364 kilograms to break his own world record by one kilogram and win gold for China for the second consecutive Olympics. It was barely a contest for the gold medal as second-place Julio Mayora of Venezuela lifted 19kg less. Assured of silver for his country's first medal in Tokyo, Mayora added his own flourish with a failed attempt to break Shi's record of 198kg for the clean and jerk, then signed off the competition with a backflip on stage.

The five Chinese lifters who have competed so far in Tokyo have four gold medals and a silver.

There was a rare sight in weightlifting as Indonesia's Rahmat Erwin Abdullah took bronze despite lifting several hours earlier in the “B” group for competitors who have registered lower starting weights. “B” lifters are typically a footnote at the Olympics, but Abdullah stuck around for the evening session as better-known competitors tried and failed to match his 342kg total.

“The only thing I do is just praying,” he said, adding that he was inspired by his father, who was in line to lift for Indonesia at the 2004 Olympics but was sidelined by injury.

Abdullah's surprisingly high total from the earlier session seemed to cause confusion for some medal contenders. His name and his total weren't shown on the screens in the arena alongside the “A” competitors, even though it counted for places. Some lifters and their coaches revised their chosen weights for lifts apparently because they hadn't initially taken Abdullah into account.

“I'm not done. This is a learning experience and I just have to learn from this competition and grow," the former world junior champion told The Associated Press. “I've got plenty more in me.”