Column: The epicenter of US speedskating is ... Florida? 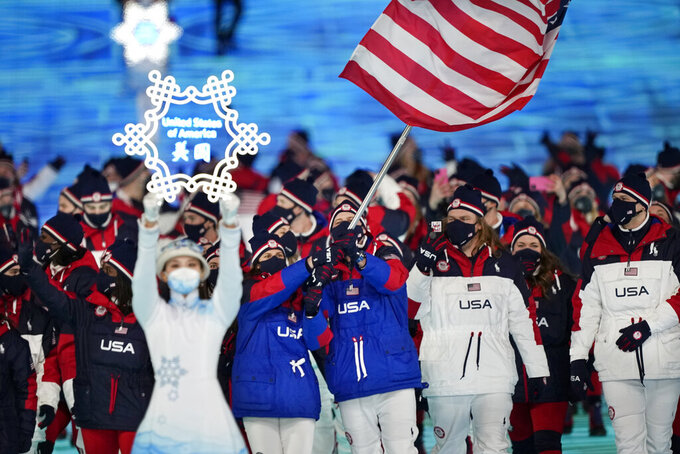 Brittany Bowe and John Shuster, of the United States, leads their team in during the opening ceremony of the 2022 Winter Olympics, Friday, Feb. 4, 2022, in Beijing. (AP Photo/David J. Phillip)

BEIJING (AP) — When one looks down the roster of the U.S. speedskating team at the Beijing Olympics, three names immediately jump out.

All three are among the world's best skaters and leading medal contenders at these Winter Games, but that's not what draws your attention.

It's the hometown beside each of their names.

The same city for all three. A place just north of Disney World that's known for producing some of the fastest thoroughbreds on the planet, earning the moniker “Horse Capital of the World.”

It might be time for Ocala, Florida to tweak that nickname just a bit.

“We have fast horses,” Renee Hildebrand bragged, “AND fast skaters.”

Hildebrand deserves much of the credit for transforming sunny, warm Ocala — where the forecast Friday called for a high of 82 degrees not long after the Winter Olympics opened in frigid Beijing with Bowe as one of the U.S. flagbearers — into the epicenter of the U.S. speedskating world.

They don't have one in Ocala.

“The closest one is an hour away," Hildebrand pointed out.

Which isn't really an issue for her, since she doesn't know how to ice skate.

Ocala does have a roller skating rink, and that's where Hildebrand thrives. She has this knack for spotting talented kids and coaching them on how to go really fast with wheels under their feet.

And, as it turned out, she had three of the most promising right in her adopted hometown. Heck, all three were born in the same hospital.

Training with Hildebrand's renowned team, Bowe and Jackson and Mantia developed into elite inliners, the winners of multiple world championships before each made the transition to ice in pursuit of Olympic glory.

Their success, which was punctuated in recent months by Jackson's stunning emergence as the first Black woman to win a World Cup event, leaves Hildebrand feeling like a proud parent.

But her enormous satisfaction is tinged by a bit of sadness. “My kids,” as Hildebrand still calls them, had no hope of getting to the Olympics with their first love.

Inline skating has been turned away time and time again in its bid to become an official Summer Games sport, and now seems to have lost whatever momentum it once had to get on an increasingly bloated program.

“People ask me all the time, ‘Are you upset that all your best skaters go to ice?’” Hildebrand said. “Well, there's only so many world championships you can win before you become bored with it. All three had done that. They were ready for the next challenge. You have to be motivated, no matter what you do. But if inline was in the Olympics, they never would've switched to ice. They were happy doing their sport.”

Their sport. Her sport. But a sport that could only take them so far.

Not far enough, it turned out.

The lure of the Olympics is strong.

“I wish inline skating was in the Olympics,” Mantia said. “It definitely deserves to be."

He still remembers the enormous drive that Hildebrand instilled in him at a young age, how she pushed him to be his very best. He wasn't thinking about the Olympics then. He just wanted to impress his coach.

“I always wanted to kind of show off for her," Mantia said after a training session at the dazzling Ice Ribbon oval, where speedskating begins on Saturday. 'I always wanted to show her how good I could skate. It was a big motivation for me."

“Skating is a very, very demanding sport, whether it's on ice or inline," he said. “She cultivated a hunger and a fighting instinct in them. When you make the transition over to the ice, no matter who it is, it takes time. She instilled them with a strong work ethic."

Hildebrand frets about the future of her sport, the one that's not in the Olympics, as the popularity of inline skating wanes in the United States.

Once a world powerhouse that produced other inline-to-ice stars such as Chad Hedrick, Derek Parra and Jennifer Rodriguez — Olympic medalists all — the American inline program has been left in the dust by a new world power, Colombia.

That doesn't bode well for maintaining a pipeline of talent from non-traditional areas into the U.S. speedskating program, and almost certainly ends any hope of inline skating getting into the Olympics.

“I think I've given up,” Hildebrand said, resignation in her voice. “I still had hope when we were on the short list, but golf and rugby got in ahead of us. I mean, the chance to have Tiger Woods in the Olympics? How could we compete with that?”

Hildebrand had planned to attend these Olympics, to cheer on those Ocala kids she played such a big role in developing, but the pandemic scuttled those hopes.

She's known for months that foreign spectators wouldn't be allowed — and that's all she would've been, since her inline coaching credentials don't hold any sway at the Winter Olympics — but the pain of missing out began to fester in recent days, like an old wound that had the scar ripped off.

“I thought I was kind of over it, but I'm not,” Hildebrand said. “I can't even describe it. I just want to be there so bad. I can't tell you how bad I want to be there with them. I have so much pride in them. They've worked so hard.”

But Hildebrand is not one to stay down for long, so she quickly shifts to her plans for the next two weeks. She'll be glued to the TV back in Florida, even though the 13-hour time difference means speedskating events will be held before the sun rises in the States.

She might even get together with the elderly patients she works with in her other job, as a physical therapist at an assisted-living facility.

“They're the only people," Hildebrand quipped, “who get up that early.”

Paul Newberry is a national sports columnist for The Associated Press covering his 15th Olympics. Write to him at pnewberry(at)ap.org or at https://twitter.com/pnewberry1963 and check out his work at https://apnews.com/search/paulnewberry