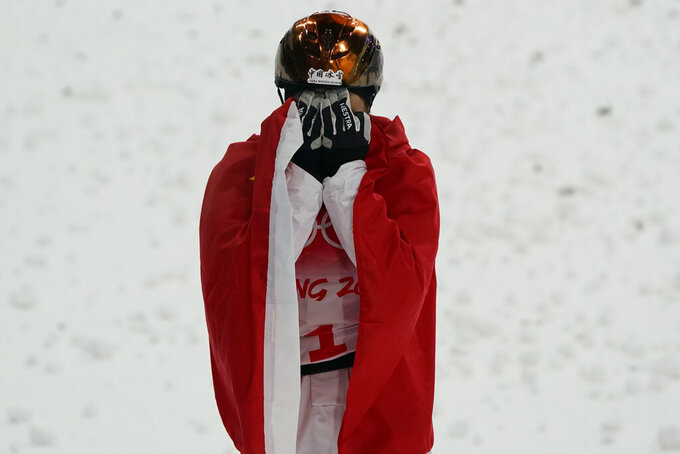 ZHANGJIAKOU, China (AP) — Her scream pierced through the glacial nighttime air. Not far away, a few cars parked near the Olympic aerials course honked their horns to celebrate.

Xu Mengtao — the daredevil they call “Tao-Tao” — has spent the last 16 years traveling the globe looking for little victories wrapped up in all those twists and spins. On Monday night, China's most successful female jumper of this generation earned her biggest win ever.

“It's a sense of honor, and a sense of mission fulfilled,” Xu said after capturing the gold medal on home turf.

One of the handful of women to consistently try triple flips over the years in a sport full of daredevils, Xu notched the first Olympic victory for the Chinese women after years of close calls (five silver and two bronze since 1998). Defending champion Hanna Huskova of Belarus took silver and Megan Nick of the United States was a surprise bronze medalist.

It was not hard to see, or hear, what this meant for Xu, and for China.

When she landed firm and kept her footing on her final jump, she pointed one, then both forefingers to the sky. She let out one shriek, then another when the score — 108.61 — came up with a “1” by her name. The horns honked. The hundred-or-so fans allowed into the stadium cheered wildly. The Chinese media down in the interview area clapped and hollered.

Moments after the winning jump, American Ashley Caldwell, another triple-flip stalwart, bent backward on her landing and her back hit the snow on the final run of the night. Four nights earlier, Caldwell had won gold in the mixed team competition. On this night, she finished fourth.

“The worst and the best positions you can get,” the four-time Olympian said.

She hugged Xu tightly at the bottom. They've been going at it, toe-to-toe, for years as they've crisscrossed the globe as part of a tight-knit sport that sometimes feels more like a family.

“She's been pushing triples for longer than I have,” Caldwell said. “And I respect her wholeheartedly for that. For her to win a gold medal in her own country is an incredible accomplishment, and it brought tears to my eyes just as much as the sadness" did from her own close call.

Even in losing, Caldwell knew this was a winning night for women's aerials. It is a sport full of risk-takers, yes, but all the risks are very calculated.

Only a select few over the years — Huskova, along with Olympic champions Lydia Lassila and Alla Tsuper come to mind — have been willing to give up the certainty of a solid score with a double for the high-risk, high-reward gambit that a triple flip involves.

At the last two Olympics, only four of the 12 finalists tried triples in the medal round. This time, seven did.

“There were a lot of girls on the triple,” said Nick, whose back-full-double-full earned her the first women's individual aerials medal for the United States since Nikki Stone won gold in 1998. “So I knew I had to lay down some nice triple-twisting doubles if I wanted to place well in the competition."

Twenty minutes after her victory, Xu was covering her face with her gloves as she climbed the top step of the podium to receive her “Bing Dwen Dwen” doll.

Her victory came only hours before another freestyle skier, Eileen Gu, was set to take to the slopestyle course and try for her second gold medal of the Beijing Games. But on this ice-cold night in the action park, they were talking about another high-flier winning gold for China — the daredevil they call “Tao-Tao.”