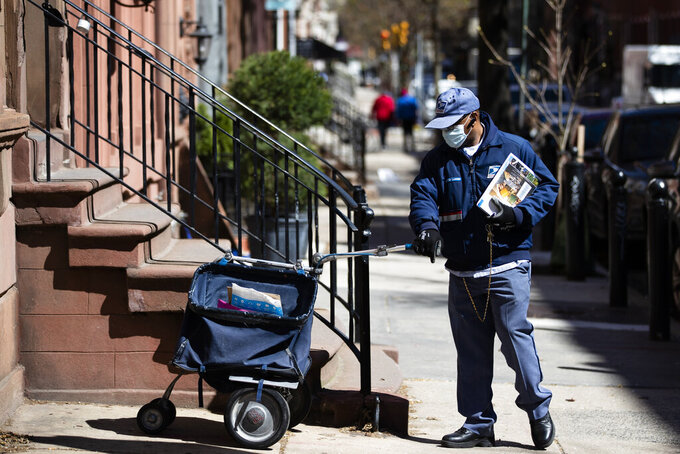 A United States Postal worker makes a delivery with gloves and a mask in Philadelphia, Thursday, April 2, 2020. The U.S. Postal Service is keeping post offices open but ensuring customers stay at least 6 feet (2 meters) apart. The agency said it is following guidance from public health experts, although there is no indication that the new coronavirus COVID-19 is being spread through the mail. (AP Photo/Matt Rourke)

Pennsylvania businesses are running out of time if they want an exemption from Gov. Tom Wolf’s shutdown order as state health officials on Thursday reported more than 1,200 new cases of COVID-19.

Wolf ordered all “non-life-sustaining” businesses to shutter their physical locations until further notice to help slow the spread of the coronavirus but established a waiver process for companies that believe they should be exempt.

The Wolf administration announced a deadline of 5 p.m. Friday for waiver applications, prompting an outcry from small-business advocates who said the deadline was premature and would create additional hardship for struggling employers.

“There has been a huge waiting list for waivers, and it is important not to prohibit a necessary business from playing a role in the emergency,” said Gordon Denlinger, state director of the National Federation of Independent Business. “We are asking Gov. Wolf to reconsider the shutdown of the waiver program.”

The state received more than 34,000 waiver requests through Wednesday. The Department of Community and Economic Development has approved about 5,600 requests and denied over 8,600, agency spokeswoman Casey Smith said Thursday.

Businesses that remain open to the public include grocery stores, pharmacies, hotels and motels, beer distributors, laundromats, and gas stations. Restaurants are open only for take-out orders. The open list also includes farms, mines, food production and some manufacturing.

Car dealers, clothing stores and other retailers, salons, and entertainment venues are among those on the shuttered list.

Through Wednesday, Pennsylvania State Police issued 136 warnings to businesses violating the shutdown order. No business has been cited.

In other coronavirus developments Thursday:

The Pennsylvania Department of Health reported over 1,200 additional people tested positive for the virus, bringing the total to over 7,000. There were 16 new deaths for a statewide toll of 90.

The virus has now reached into the most rural parts of Pennsylvania. Cameron County, the state's smallest with about 4,450 residents, reported its first death.

For most people, the virus causes mild or moderate symptoms that clear up in a couple of weeks. Older adults and people with existing health problems are at higher risk of more severe illness, including pneumonia, or death.

Boeing said Thursday that it is suspending production operations at its facilities in suburban Philadelphia for at least two weeks, a move it said is designed to ensure the safety of employees.

Work will stop at the end of Friday and resume April 20, it said.

The site includes manufacturing and production facilities for military rotorcraft, including the H-47 Chinook, V-22 Osprey and MH-139A Grey Wolf, along with defense and commercial services work and engineering design.

Employees who cannot work remotely will receive paid leave for the 10 working days, it said.

Pennsylvania has received about half the personal protective medical equipment it requested from the federal government, and state officials say more has been promised.

The U.S. House Committee on Oversight and Reform on Thursday released data on distributions from the Federal Emergency Management Agency to several states.

Pennsylvania asked for 494,000 of the all-important N95 respirator masks that are in high demand but short supply at some medical facilities treating coronavirus patients. It received 112,000, with another 121,000 promised, according to the data.

The state is also supposed to be getting more face shields and surgical masks than it asked for, but not as many pairs of gloves, the report said.

Maureen May, a nurse at Temple University Hospital, said Thursday that nurses are already having to ration personal protective equipment while treating some 30 coronavirus patients in the hospital’s intensive care unit.

“If we cannot protect ourselves, we’re spreaders, we are going to spread not only to our patients, (but) our colleagues and the community,” May told reporters on an unrelated conference call arranged by the Pennsylvania Democratic Party.

The head of the Pennsylvania Emergency Management Agency said he wants to have six alternate care sites up and running in short order so they can take the strain off existing hospitals during the COVID-19 peak.

PEMA Director Randy Padfield has set an April 10 deadline to have the sites operational, although he said a big challenge will be to get the required health-care manpower in place.

The sites will house comparatively less sick “subacute” patients so hospitals do not get overwhelmed, Padfield said.

PEMA officials have not disclosed the locations that are being assessed, but said they could include shuttered hospitals, warehouses and school buildings.

Brick-and-mortar liquor stores are closed because of the pandemic, but nearly 278,000 people tried to place orders on the Pennsylvania Liquor Control Board website during the first day of digital sales, according to data released Thursday. By comparison, the site attracted 32,300 users when the liquor agency recently released several sought-after but limited-availability whiskeys.

For now, the state is limiting website access to prevent the system from crashing, giving only a limited number of randomly selected consumers access to shop. All others get a screen indicating the online store is closed.

Pennsylvania residents will be allowed to carry guns on expired permits.

Wolf granted an extension for holders of concealed carry permits. State police said that permits that expired March 19 or later have been extended to May 30. The extension was granted because some county courthouses are closed because of the pandemic.

Walmart has temporarily closed a Pennsylvania fulfillment center after workers tested positive for the virus.

The retailer said it closed the center in Bethlehem on Wednesday night so it can be cleaned and sanitized. The center, which processes online orders and employs nearly 1,800, will be closed until Monday, said Walmart spokesman Kory Lundberg.

When workers return, Walmart will provide gloves and masks and take employees’ temperatures before they begin their shifts, part of a new policy announced by the retail giant for all its stores and warehouses, according to Lundberg.

Workers have expressed grave concern about the conditions in Bethlehem, saying that they have been forced to operate in tight quarters and that the facility wasn't being cleaned properly.