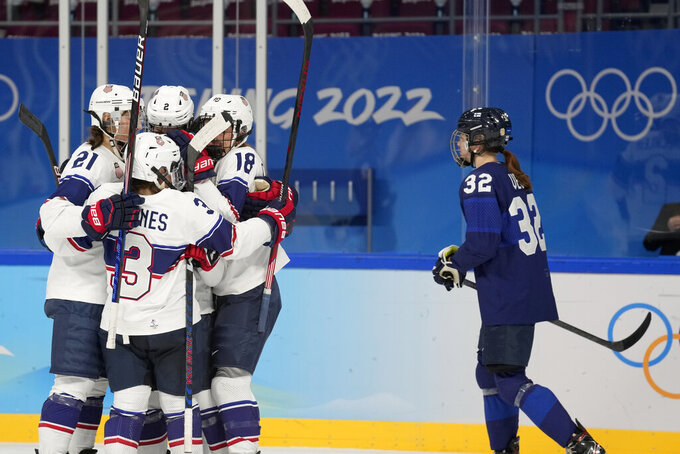 BEIJING (AP) — Difficult as it was hearing Brianna Decker crying out in pain while laying prone on the ice, Kendall Coyne Schofield understood the U.S. women’s hockey team still had a game to finish.

After the Americans wrapped up their 5-2 win over Finland to open the Beijing Games, Schofield could verbalize what she felt when encountering Decker standing on crutches next to the bench.

“I just told her, `We got this,'” Schofield said. “No matter what she’s a big part of this group. ... You saw that in our response after she went down, how much we picked up the game and took control.”

The Americans certainly had their veteran teammate’s back after Decker was hurt while being tripped from behind by Ronja Savolainen 9:32 into the first period.

The sight of the team’s assistant captain and 11-year veteran unable to put weight on her left leg before being stretchered off provided a motivating spark to the defending Olympic gold medalists.

Amanda Kessel and Alex Carpenter scored twice over the next 3 1/2 minutes in the Group A match. Schofield then put the win away with two goals in 64 seconds in the second.

“There’s no replacing Brianna Decker,” said Schofield, the team's captain. “But in that situation, everyone stepped up to the plate in the way they were asked to. And I think that’s how we were successful tonight.”

Now it’s a matter of the Americans continuing to forge ahead — while more than likely missing their top center — in their bid to become the first U.S. squad to win consecutive titles.

“It was sickening,” Kessel said of the yelps of pain coming from Decker after she and Savolainen were tangled up to the left of the U.S. net.

“She’s one of the toughest players that I’ve ever played with or against, so you know she’s not staying down on the ice or crying when it’s not bad. So it’s definitely a gut punch,” Kessel added. “We want to win for her.”

Without going into detail, coach Joel Johnson said Decker’s injury was still being evaluated. Johnson also said he wasn’t going to dispute the official’s decision not to penalize Savolainen, who appeared to slew-foot Decker from behind, leading to both players falling to the ice.

“They saw it as just people getting tangled up,” Johnson said. “I’m biased, and so I saw it a little differently. But I don’t think it was a missed call by any means.”

Savolainen said she wasn’t sure what happened, and called it “an unlucky situation” while sharing what she told Decker following the game.

Decker’s injury was the second to a key player during the tournament’s opening day. Canadian forward Melodie Daoust did not return after being checked hard into the boards by Sarah Foster in Canada’s 12-1 rout of Switzerland.

Carpenter scored twice for the U.S., and Maddie Rooney stopped 10 shots in just her second game since an injury forced her to miss the world championships in August.

Finland had little response to the Americans’ push after Decker was hurt. The Finns managed just one shot over the remainder of the first period. They were outshot 19-2 in the second and 52-12 overall.

Susanna Tapani scored twice, and Anni Keisala made 47 saves for Finland, which won bronze at the 2018 Games.

Tapani’s second goal came with 2:20 remaining, although it wasn’t awarded until a video review was conducted after time ran out. The teams were ready to depart to their locker rooms before they had to play the final 2:20 over again.

“USA are a really good team and they did an awesome job,” Finland captain Jenni Hiirikoski said. "They showed how to score today.”

The Americans improved to 9-0 against Finland in Olympic play. The U.S. has Friday off before facing Russia on Saturday.

In other games, Natalie Spooner had two goals and three assists and Claire Thompson had a goal and four assists in Canada’s win over the Swiss in Group A.

“That’s quite the way to make an entrance into the Olympics,” Spooner said.

Sarah Fillier scored the first two goals and the Canadians led 8-0 through two periods. Canada is the reigning world champion after a 3-2 overtime win over the U.S. in August ended the Americans’ five-tournament gold-medal run.

In Group B, Michaela Pejzlova scored on a breakaway with 13:33 left in the third period, and the Czech Republic capped its women’s hockey Olympic debut with a 3-1 win over host China.

China was outshot 36-14 in its first Olympic appearance since finishing seventh of eight teams in 2010. Mi Le scored and Canadian-born goalie Tiya Chen stopped 33 shots for a Chinese national team made up of mostly members of the Russian-based Women’s Hockey League’s Vanke Rays.

With the Czech Republic up 2-1, Pejzlova secured the win by beating Chen through the legs after being set up by a blue-line-to-blue-line pass from Pavlina Horalkova.

Fans — each with a blue-colored Olympic flag to wave — were seated socially distanced in two corners of the lower level of Wukesong Sports Centre. There were also about two dozen male and female cheerleaders who lined the rail above the first level. The cheerleaders wore dark blue jerseys with “Ice Hockey” printed on them, and performed a dance to techno music before the start of each game and during the intermissions.

In another Group B game, Rui Ukita capitalized on a turnover to score the go-ahead goal on a breakaway 4:03 into the third period in Japan’s 3-1 victory over Sweden.