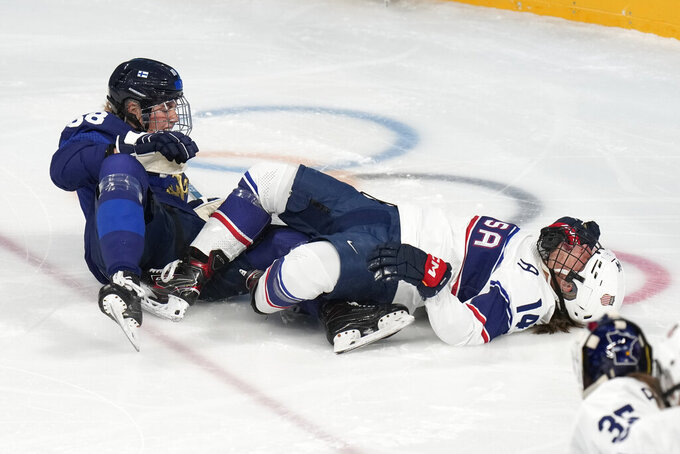 United States' Brianna Decker (14) lies on the ice after colliding with Finland's Ronja Savolainen (88) during a preliminary round women's hockey game at the 2022 Winter Olympics, Thursday, Feb. 3, 2022, in Beijing. (AP Photo/Petr David Josek)

BEIJING (AP) — With the interview over, Brianna Decker nestled her immobilized left leg on the seat of her scooter, gripped the handlebars and sped out of the room under the push-power of her right foot.

Decker’s Beijing Games ended shortly after they began, 9:28 into the American team’s preliminary round-opening 5-2 win over Finland, when her left leg gave out upon being tripped from behind by Ronja Savolainen. The force of the trip combined with the fall led to Decker breaking her fibula and tearing the ligaments in her ankle.

“I knew right away I broke something,” said Decker, who immediately began yelping in anguish while her legs were tangled with Savolainen. “In the moment, I was like, `Yeah, it’s going to (stink), and I know I’m going to get some scans back that I’m not going to be happy with.'”

And yet, much like the swelling has begun to subside, so has the tender pain of the memories one week later.

While Decker can’t be on the ice to help, the top-line center has shifted her attention to the only objective she and her teammates had upon arriving in China — repeating as Olympic champions.

“For it to happen the first game was super disappointing,” she said. “But at least our team’s not out of the tournament. We can still go on and compete and hopefully bring home a gold medal for the U.S. again.”

The Americans (3-1), coming off a preliminary round-closing 4-2 loss to Canada, open the playoffs against the Czech Republic in the quarterfinals on Friday. Barring a major upset, it’s highly anticipated the U.S. will face its cross-border rival, Canada, in the gold-medal final next week.

At 31 and one of the team’s assistant captains, Decker is serving as an extra coach in watching games from above, while also helping to continue mentoring the team’s younger players in handling the pressures of their first Olympic experience.

Decker has put off surgery until returning to North America. In the meantime, she is grateful to have received condolences from numerous athletes, including speedskater Britanny Bowe and skier Nina O’Brien, who broke her tibia and fibula during a giant slalom run this week.

Decker’s hockey teammates have done their part to keep up her spirits.

“We play cards a lot and stuff like that,” she said. “But honestly, when we have games and practices, that’s the best for me. I definitely don’t want to be away from the rink.”

“Her leadership shines through each game we play,” Schofield said. “It just shows how much she means to this team and how she’s able to still lead through some of the darkest times of her personal life.”

Where Decker is sorely missed is on the ice, with her play-making presence difficult to replace in centering a line alongside two of the team’s top offensive threats in Amanda Kessel and Alex Carpenter. Her absence factors into why the Americans have had difficulty converting chances, which was evident in the loss to Canada. The U.S. scored twice on 53 shots on net.

“As a group, we just got to tweak some things going forward, obviously burying those rebounds and making sure that we’re capitalizing on them,” she said. “But I think there’s no harm that we had 50 shots. That means offensively we were there and we were moving the puck well and getting those opportunities.”

It was still difficult to resist the urge to jump out of the stands and suit up in watching the U.S. trailing in the third period.

“Would I rather be playing? Of course,” Decker said. “But at least I’m still here and able to help the team in some way.”