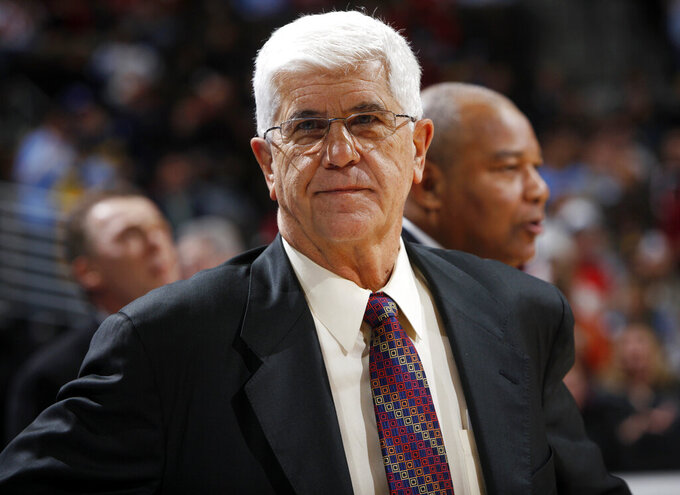 FILE - In this Nov. 23, 2008, file photo, Chicago Bulls assistant coach Del Harris looks on during the first quarter of an NBA basketball game against the Denver Nuggets in Denver. Harris was revealed Friday, Oct. 2, 2020, as this year’s winner of the Chuck Daly Lifetime Achievement Award, as presented by the National Basketball Coaches Association. Harris coached in the NBA for 32 seasons, 14 of them as a head coach with Houston, Milwaukee and the Los Angeles Lakers. (AP Photo/David Zalubowski, File)

LAKE BUENA VISTA, Fla. (AP) — Del Harris was a small-college player and once those days were over his life’s goal was to be a successful small-college coach.

He did quite a bit more than that.

Harris was revealed Friday as this year’s winner of the Chuck Daly Lifetime Achievement Award, as presented by the National Basketball Coaches Association. Harris coached in the NBA for 32 seasons, 14 of them as a head coach with Houston, Milwaukee and the Los Angeles Lakers.

“This one has a special meaning simply because, I was noting the tremendous names that have gotten this award before and knowing there are many others out there who have given their professional lives to the sport,” the 83-year-old Harris said. “Coaching basketball is a special thing. It’s a ministry, a service, depending on how you look at it. When you do it, you’re fitting into the lives of the players in a very special way and a special relationship can be developed.”

Harris has spent parts of seven decades in the game as a coach or player. He also coached more than 400 international games, with experience coaching the national teams from Puerto Rico, China, Canada, the Dominican Republic and the U.S.

Over the years, Harris watched eight of his assistant coaches eventually become head coaches and two others become NBA general managers. He worked with seven centers who went to the Naismith Hall of Fame, including Yao Ming, Moses Malone and Shaquille O’Neal. He also coached Kobe Bryant and Magic Johnson, which he said is part of the way he’s typically introduced before he appears at clinics.

“I get introduced as Kobe’s first coach, Magic’s last coach and in the movie Space Jam,” Harris said. “That’s all they care about.”

Harris’ college career started in 1965 at Earlham College, where he went 175-70 in nine seasons. He coached briefly in the ABA in 1975 and his NBA career started as a Houston assistant the following year.

NBA Commissioner Adam Silver, speaking on NBA TV before the game, sent well-wishes to President Donald Trump and First Lady Melania Trump, along with members of their travel party, in response to the news that they both had tested positive for the coronavirus.

Silver said the NBA was in regular contact with the government — including Dr. Anthony Fauci, a key player in the coronavirus task force — on its plans for the restart bubble at Walt Disney World.

No players have tested positive after entering the bubble. And even with the season now in its final days, Silver said he can't relax yet.

“We have another week or so to go before we can really say we did it," Silver said in the NBA TV interview. “And every night when I go to sleep, with my cell phone next to me, I am sort of waiting for that call potentially to say we have an issue. It’s just one of those things. This is an incredibly virulent virus. The fact that the President of the United States and the First Lady — despite all the protections around them — still got it tells you that."

Silver, in the same NBA TV interview, also addressed how the planned Tokyo Olympics next summer could affect next season's NBA calendar. He said an in-season stoppage to accommodate the games would be considered, but sounded most dubious about the chance of that happening.

“We'll be able to field a very competitive team," Silver said, referring to USA Basketball. “I am a bit worried about some of the international teams because, as you know, some of their stars play in our league and their absence would make a huge difference for those national teams.

“Having said that, I'd only say these are such extraordinary circumstances that even if we set out to plan for the Olympics, how can they even know what the world's going to be like next summer and whether they can go forward," Silver continued. “So I just think, during these extraordinary times, all the conventional rules are off the table and everybody's just going to have to make certain accommodations."

The NBA selected James Capers as crew chief for Game 2 of the NBA Finals on Friday night. David Guthrie is the referee and Eric Lewis is the umpire.

This means that Tony Brothers, Tony Brown, Pat Fraher, John Goble, Scott Foster and Zach Zarba — the six remaining officials in the 12-man pool for this year’s finals — will all work either Game 3 or Game 4 of the title series between the Los Angeles Lakers and Miami Heat.

The NBA always includes educational elements in cities playing host to the finals, and this year made the same commitment — in a slightly different way.

The league announced Friday that it will create a new space at the Challengers Clubhouse in Los Angeles, part of that city's Boys and Girls Club. The renovated room, which will be installed after the finals, will allow provide new materials “to explore science, math, engineering and technology in a safe and educational space," the league said.

Among the equipment: dozens of iPads and Chromebooks, ten Nintendo Switch consoles and three 3-D Printers.