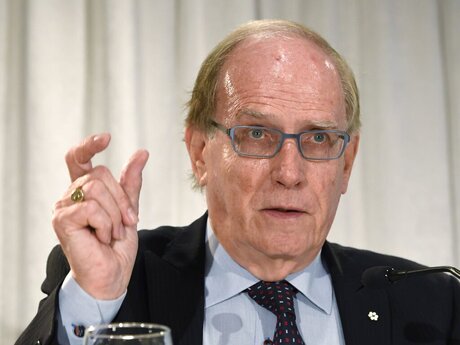 By: GRAHAM DUNBAR (AP)
ZURICHCopyright 2020 The Associated Press. All rights reserved. This material may not be published, broadcast, rewritten or redistributed.
47.36678.55

"We are focusing on winter sports athletes first. We will get that information out as quickly as we can produce it," McLaren told The Associated Press in an interview on Friday.

The Canadian law professor's interim report for the World Anti-Doping Agency implicating more than 20 summer and winter sports in Russia was published in July.

It led to a chaotic legal process for Russian athletes to be blocked or approved for competition at the Rio de Janeiro Olympics.

McLaren never set a deadline for his final report, though many expected progress before the winter sports season starts to peak in November.

"It's urgent to get the report out as quickly as possible," McLaren said on the sidelines of a sports ethics conference hosted by FIFA, which is also awaiting his evidence of possible doping cover-ups.

After the powerful first report was published, the IOC advised winter sports bodies to "freeze their preparations for major events in Russia" in 2016 and find host cities in other countries.

That interim order affected figure skating and ski jumping before a scheduled review by the IOC executive board at a Dec. 6-8 meeting.

McLaren's new timetable on Friday suggests Russian-hosted events in early 2017 are at risk, including world championships in bobsled and skeleton plus World Cup events in at least five winter disciplines.

Though his final report is "at least several months away," McLaren's could send evidence within weeks to sports governing bodies if it suggests doping by individuals.

"We haven't reported any of it to any sporting federation at this stage. When it's done, we will," McLaren said earlier Friday.

WADA appointed McLaren in May to investigate claims made in American media by the laboratory director who oversaw drug testing at the 2014 Sochi Olympics. The Russian official alleged a conspiracy by state authorities to cover up athletes' doping and help Russia top the medals table at its home Winter Games.

McLaren delivered a damning 103-page document which detailed a plot to swap out Russian athletes' doping-tainted urine samples from 2011 through 2015.

In July, McLaren asked for more time to complete his investigation.

"We will also report on information we had that we didn't have time to analyze in the last report, and see if it either makes the picture bigger, clearer, or changes it," he said Friday.

The report already suggested 12 doping cases in Russian soccer that were covered up, including one that could directly implicate Vitaly Mutko, Russia's sports minister and top soccer official.

"We are not singling him out for any investigation steps," McLaren said of the FIFA ruling council member, who is overseeing 2018 World Cup preparations.

McLaren has not yet sent evidence to the FIFA ethics committee which has power to suspend Mutko.

"I am sure they are thinking it's very urgent, I know they are," McLaren said of the FIFA ethics prosecutors' request. "But I have to deal with all the federations. They will get their information about very close to the same time."

Though Russian hackers are alleged to be behind a cyberattack on the WADA database, McLaren said a suspected hack to access his investigation files did not appear to succeed.

"There have been some possibilities of that and steps have been taken to protect our information," he said.