Doping testers stay up close with athletes despite virus 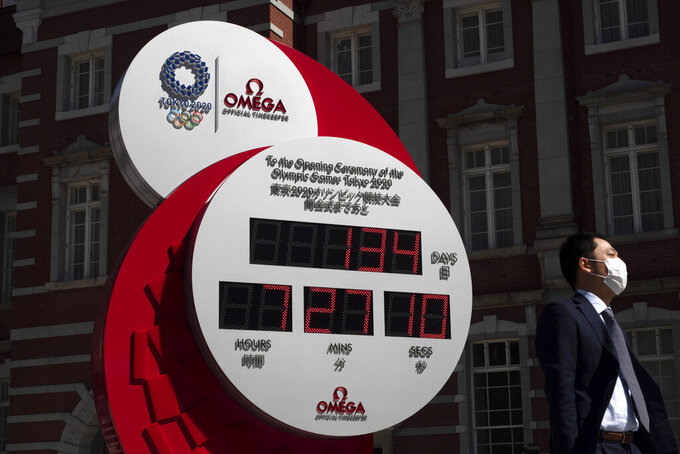 A man with a mask walks past a countdown clock for the Tokyo 2020 Olympics Thursday, March 12, 2020, in Tokyo. The Tokyo Olympics are being threatened by the spreading coronavirus. Organizers and the International Olympic Committee have repeatedly said the games will open on July 24 as planned, with the Paralympics opening on Aug. 25. For most people, the new coronavirus causes only mild or moderate symptoms. For some it can cause more severe illness. (AP Photo/Jae C. Hong)

DÜSSELDORF, Germany (AP) — Getting very close to strangers is some people's job, even in a global virus outbreak.

Doping testers around the sporting world are trying to avoid infecting themselves or athletes, but that's not always easy when you have to squeeze into a cubicle with a sports star.

As the World Anti-Doping Agency's training materials states: “direct observation of the urine passing from the Athlete into the collection vessel is critical."

With the virus spreading, athletes and sports teams are increasingly quarantining themselves. Anti-doping agencies are grappling with how to keep athletes safe while ensuring quarantine isn't misused by dopers seeking a two-week exemption from testing.

The Russian anti-doping agency has issued its staff with disinfectant wipes and face masks.

“Use the mask if one of the athletes is ill and potentially could carry a risk of infection,” e-mailed instructions from Russian agency deputy CEO Margarita Pakhnotskaya state to staff. “Offer athletes to use a single-use mask if they have concerns about infection.”

Pakhnotskaya said Thursday she is working from home as a self-isolation measure after attending meetings in the French city of Strasbourg last week.

Russian officials ask for a passport stamp and plane ticket if an athlete claims to have returned from a high-risk area. Other countries are still working out their procedures and how to apply medical exemptions from no-notice testing.

“We haven't had that situation so far,” Jeremy Luke, senior director of sport integrity at the Canadian Center for Ethics in Sport, told The Associated Press on Wednesday. "Our thinking to date is that it would be dealt with on a case by case basis, respecting an athlete's decision to do that, but wanting to ensure that we do receive information that corroborates that decision to the extent we feel is necessary."

The CCES is allowing staff to work from home and use sick leave if they need it, rather than feeling obliged to turn up.

“If you feel sick, don't come to work,” Luke said.

As Italy shuts down sports events to prevent the virus' transmission, the national anti-doping agency said it was trying to continue testing athletes.

For most people, the coronavirus causes only mild or moderate symptoms, such as fever and cough. For some, especially older adults and people with existing health problems, it can cause more severe illness, including pneumonia.

The vast majority of people recover from the new virus. According to the World Health Organization, people with mild illness recover in about two weeks. Those with more severe illness may take three to six weeks to recover.

The Olympics are still scheduled to start in Tokyo on July 24, despite massive disruption to the qualifying calendar. WADA is tracking any gaps in testing around the world.

“They indicated that they are proactively monitoring testing data and they're identifying gaps that demonstrate a lack of testing in certain areas, that could be a result of this virus, and it could be a very legitimate result of the virus," Luke said.

"Through that they're looking at how we deal with that to ensure that those athletes are subject to testing and to ensure that no one may be trying to take advantage of the situation in a way that may facilitate doping.”