Drop in sales mean Powerball jackpots will get even smaller 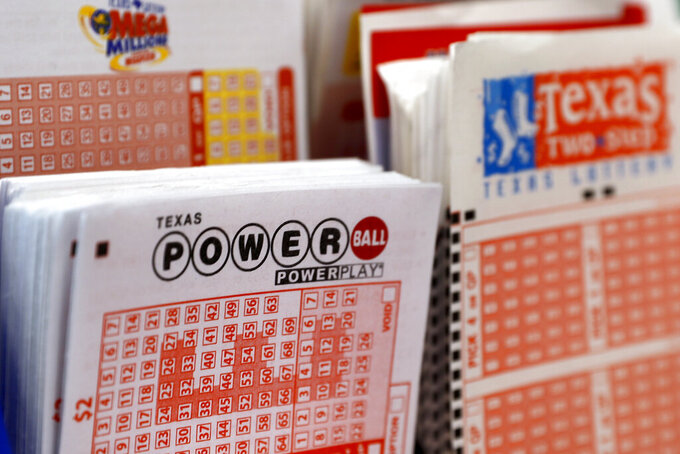 A play slip for the Power Ball lottery sits in a holder at a convenient store in Dallas, Thursday March 26, 2020. Lottery jackpots are going to shrink as the coronavirus pandemic tamps down lottery sales. The group that oversees the Powerball game announced Wednesday night that it would cut minimum jackpots in half. (AP Photo/Tony Gutierrez)

DES MOINES, Iowa (AP) — Look for Powerball jackpots to get even smaller as the new coronavirus keeps more people at home, not out buying lottery tickets, officials said Thursday.

It was only last week that the Powerball Product Group announced it would cut guaranteed jackpots in half and reduce the minimum amount the big prize could grow between drawings. On Thursday, the organization said it would toss out even those guarantees and instead decide new jackpots and increases prior to each drawing.

Besides a drop in sales, declining interest rates also have limited the organization's ability to fund bigger prizes, said Gregg Mineo, chairman of the Powerball Product Group Chairman and director of the Maine Lottery,

“Since last week, more states and cities have asked their residents to stay at home, which has affected normal consumer behaviors and Powerball game sales,” Mineo said in a statement. “In response to the public health crisis, interest rates have declined. As a result, additional game sales are necessary to fund comparable jackpot amounts.”

Before those smaller jackpots begin, players still have a chance at a $180 million grand prize. The next drawing for that jackpot is Saturday.

The leaders of Mega Millions, the other national lottery game, haven't said if they will make similar changes to that game. Both games are run by state lotteries.

One thing that won't change is the minuscule chance of winning the jackpots. For Powerball, the odds are one in 292.2 million, and for Mega Millions they're one in 302.6 million.

Powerball and Mega Millions are played in 45 states plus Washington, D.C., and the U.S. Virgin Islands. Powerball also is offered in Puerto Rico.