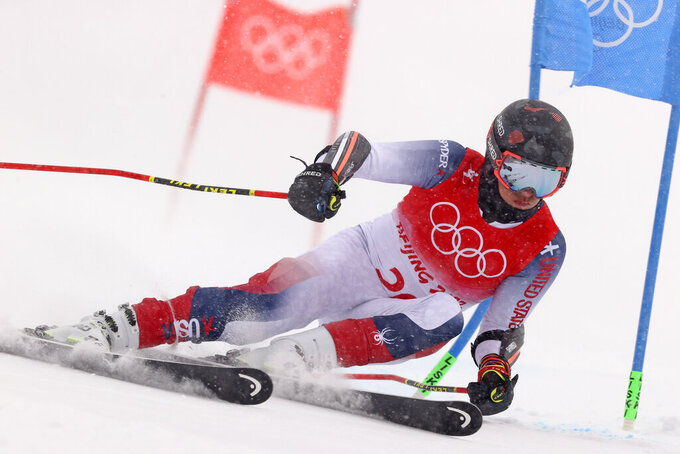 Tommy Ford, of United States passes a gate during the second run of the men's giant slalom at the 2022 Winter Olympics, Sunday, Feb. 13, 2022, in the Yanqing district of Beijing. (AP Photo/Alessandro Trovati)

BEIJING (AP) — American skier Tommy Ford thought the cascading wall of large white flakes during the first snowy Alpine race of the Beijing Olympics left the slope for Sunday’s giant slalom with a handful of “grippier” spots and “a little chatter here and there.”

His U.S. teammate, River Radamus, described the course known as “The Ice River” as “a little bit bouncy.” To Norway’s Henrik Kristoffersen, the precipitation rendered the hill “quite aggressive.”

A day earlier and a half-mile away on “The Rock” course at Yanqing Alpine Skiing Center, Italy’s Elena Curtoni offered an assessment after the first women’s downhill training session that was entirely in her native language, with the exception of this English word: “Grip.”

Asked if there is a counterpart for that term in Italian, she shook her head. “Actually,” Curtoni explained, “we use ‘grip.'"

As in many sports, and plenty of other fields, Alpine skiing has a lingua franca — words and phrases that allow folks from various places to communicate in a shared language. In this instance, much of it has to do with snow and the way it can be affected by aspects of the weather.

“There’s a lot of terminology about the feel that skiing gives you when you’re on a course. If a course ‘pulls,’ it’s bringing you to the gate sooner than you would expect. If the snow is ‘reactive,’ it means it’s easier to make a turn. There’s subtleties you pick up along the way,” said Ryan Cochran-Siegle, whose silver in the men’s super-G on Tuesday is the only Alpine medal for the U.S. so far in China. “That’s when you learn them: When you’re with your friends and learning skiing. Sometimes you make up your own lingo. But there’s a common understanding.”

WHAT ARE THEY TALKING ABOUT?

Let’s allow some American ski racers to explain what some of these things mean:

Grippy: “Dry, hard snow. We call it ‘grippy’ because it really grabs at your edges. So, it’s really easy to turn on. Sometimes it’s easy to overturn on. But it also can be unforgiving with mistakes. You can easily catch edges. Grippy snow is your classic Colorado snow. It doesn’t have to be manmade, but often it’s manmade.” (Breezy Johnson)

Chatter: “When your ski is vibrating a little. ... Like rumble strips on the interstate.” (Cochran-Siegle)

Getting bounced: “When your ski hits a bump and then it kicks you off-line. It’s not like a clean turn. You’ll hit a bump and then you’ll be off-line and you’re in a different place than where you want to be.” (Bennett)

Sugary: “It’s soft snow but it’s not new. Just straight-up soft. Sometimes at the bottom of the ski slope, if it’s kind of warm, but dry, then at the bottom, where people walk around in their boots, it’s sugary snow. ... There’s no purchase on sugary snow. You try to turn on it and you just trench in and it’s not very fun. ... We hate sugary.” (Johnson)

WHY DO THESE WORDS MATTER?

They allow skiers to get a grasp of elements that can change the way they approach a race.

Often, these terms are used in course reports coaches or competitors relay to those who have yet to come down the hill.

“They do represent real things. They’re not just slang and, like, ‘Oh, I was shredding!’ They really are critical to understanding the circumstance you’re trying to convey to the other people,” said Bode Miller, whose six Olympic Alpine medals are an American record. “It’s ... specific and accurate terminology, because there’s a big difference between ‘chalky’ and ‘grippy.’”

“You have icy, grippy, soft, bally, sugary and slushy. Those are the six main snow conditions,” she said. “And then you have surface conditions. Chattery, bumpy, smooth, I guess, are probably basically your three there.”

DOES IT ALWAYS MAKE SENSE?

Not necessarily. Markus Waldner, the men’s World Cup race director, is annoyed whenever he hears skiers talk about snow being “aggressive” — meaning, as with “grippy,” that there can be a strong connection between the skis themselves and the surface underneath.

Except Waldner points out that such variations have more to do with the equipment a racer uses than with the snow itself.

A racer’s technician can alter skis to allow for better contact.

One example: If the snow is "grippier,” Miller explained, “your technician might dull your skis back a little bit — take a gummy stone to the tip and tail of your skis to make them less aggressive — because the snow is going to be more responsive than it was on previous days on the same turn.”

WHO UNDERSTANDS THIS JARGON?

In a word: Everyone. No matter the country -- and there are 83 represented in Alpine competition at the 2022 Olympics.

“Oh, yeah. Their English is a lot better than my German or French or Italian. Some of the Norwegians probably have better English than we do,” Cochran-Siegle said with a smile. “We’re fortunate. We come across as a little not-as-well-educated with a lack of understanding of other languages.”