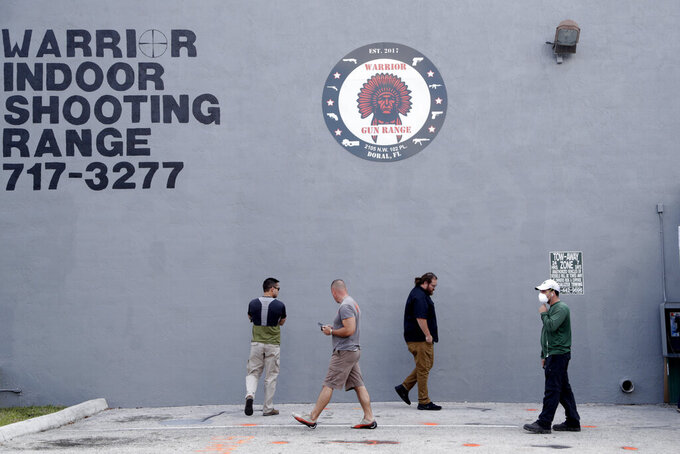 FILE- In this March 27, 2020 photo, customers practice social distancing in adherence to the new coronavirus guidelines, as they wait to enter the Warrior Gun Range and Shop in Doral, Fla. Background checks for new gun purchases in Florida during March – when the coronavirus pandemic worsened dramatically – surged to set records, according to the latest figures the FBI released Wednesday, April 1, 2020. The March number of more than 192,000 checks reflecting gun purchases in Florida is higher than any month in more than two decades. (AP Photo/Lynne Sladky, File)

JACKSONVILLE, Fla. (AP) — Background checks for new gun purchases in Florida during March – when the coronavirus pandemic worsened dramatically – surged to set records, according to the latest figures the FBI released Wednesday.

The March number of more than 192,000 checks reflecting gun purchases in Florida is higher than any month in more than two decades. Nationally, the FBI said, it conducted more than 9 million background checks during the first three months of the year – also a record.

Angel Serrano, 24, of Bonita Springs in southwest Florida bought his first firearm on March 20 – the busiest day of the busiest month ever for background checks in the United States. Everyone in the crowded gun store was talking about the virus, he said in an interview.

Serrano said his purchase of a Sig Sauer P365 9mm handgun wasn’t entirely due to coronavirus concerns, but the outbreak motivated him to purchase sooner. He said he was concerned that law enforcement may not be able to help him or his family quickly in an emergency.

“They won’t be able to be there in a second,” Serrano said, echoing concerns among gun buyers. “It does take some time. So having that mindset of knowing that I’m the first line of defense for myself was my initial reason to want to purchase a firearm.”

The FBI’s new figures – for checks conducted through the National Instant Criminal Background Check System – reflect fears many feel about the virus and its implications. The numbers announced Wednesday were the first to reflect sales through the end of March, as the U.S. suffered more than 3,800 deaths from the virus.

Serrano said he researched his pistol purchase online but most were sold out. In his local gun store, he saw long lines to fill out paperwork and employees juggling multiple customers at a time.

“(Coronavirus) was definitely number one topic of the conversation,” Serrano said. “The people behind me, in front of me, were talking about it, about what could happen, about people getting ready, things like that.”

“At the end of the day, you always hope that nothing happens,” he said. “But if it does, and you’re not ready, that could mean your life.”

Background checks surged around the time the total number of COVID-19 cases in the United States reached 18,000, according to the CDC. There are now over 186,000 cases nationwide.

Three of the four weeks in March individually set records nationwide for highest numbers of background checks, the FBI said. The week starting March 16 was the highest in history, with nearly 1.2 million checks completed.

The record-breaking numbers in Florida came the same week Gov. Ron DeSantis banned all on-site dining at restaurants, the state’s largest county closed its beaches and the numbers of COVID-19 cases ballooned here from 4,000 to over 18,000.

DeSantis bowed to pressure and issued a statewide stay-at-home order Wednesday. The order required people starting Friday to limit their interactions outside of their homes only to necessary and essential activities. The order will last 30 days.

Victor Jubran, a salesman at Wild West Guns and Gold in Jacksonville, said the stores’ prices for guns and ammunition have remained flat, but March traffic in the store increased and the number of people purchasing handguns and ammunition exceeded expectations.

Jubran said gun buyers were preparing for looting or other unexpected emergencies coronavirus may bring.

“People are just scared, and they’re trying to prepare themselves for the worst,” he said.

In other states, background checks in March exceeded 200,000 in Texas, Kentucky and Illinois. They exceeded 100,000 in March in California, Indiana, Michigan, Ohio, Pennsylvania and Utah.

This story was produced by Fresh Take Florida, a news service of the University of Florida College of Journalism and Communications. The reporter can be reached at adimichele@freshtakeflorida.com.