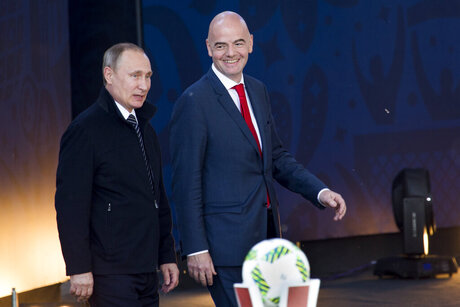 By: GRAHAM DUNBAR (AP)
GENEVACopyright 2020 The Associated Press. All rights reserved. This material may not be published, broadcast, rewritten or redistributed.
46.20226.14569

Hershman helped bring Scala to FIFA in 2012 and said his exit is "the worst thing that could have happened."

"One of the few shining lights we had was Domenico," Hershman, the American co-founder of Transparency International, told The Associated Press in a telephone interview. "Now that he has gone, my skepticism is even greater."

Hershman spoke from Doha ahead of being announced as CEO of the Qatar-funded International Centre for Sport Security.

Scala resigned last month after his working relationship with Infantino broke down, including disputes over the presidential salary and the FIFA Council taking powers to fire elected independent officials.

Last year, Scala proposed a slate of reforms amid FIFA's corruption-fueled crisis that was the basis of modernizing changes drafted by a panel which included Infantino.

Their work picked up on a previous round of reforms steered by a FIFA-invited expert group which included Hershman and was led by Swiss law professor Mark Pieth. That panel was left frustrated by FIFA blocking outsiders from key positions.

"I remain convinced now more than ever that FIFA, if it is to survive, there must be independent oversight because they have no credibility," Hershman said.

In 2012, Hershman was involved in talks that led FIFA to appoint prosecutor Michael Garcia and judge Joachim Eckert to lead its ethics committee in an investigation of World Cup bidding that included Qatar's victory in the 2022 hosting contest.

The investigation concluded that wrongdoing linked to most of the nine bid candidates did not justify reviewing the status of Qatar and 2018 World Cup host Russia.

Now, Hershman is working for the Qatar-based center which advises governments and sports bodies on event security and integrity of competitions.

"I want to kind of do what I did at Transparency International, creating chapters around the world to promote values," he told the AP. "I am not naive. It is going to take a long time."

Another World Cup scandal, over Germany's bidding and organizing of the 2006 tournament, has affected the ICSS.

Hershman confirmed that one of his former ICSS colleagues, Horst Schmidt, is no longer on its advisory board.

Hershman said one task in his new job is to find new funding for the ICSS, which gets 70 percent of its annual budget of ablout $30 million from Qatar's government.

"I will take clean money from anyone but with no strings attached," Hershman said, insisting that Qatar gives its "funding without any conditions. No one has ever told me to shut up."