FIFA expects to get evidence in May of Russian doping cases 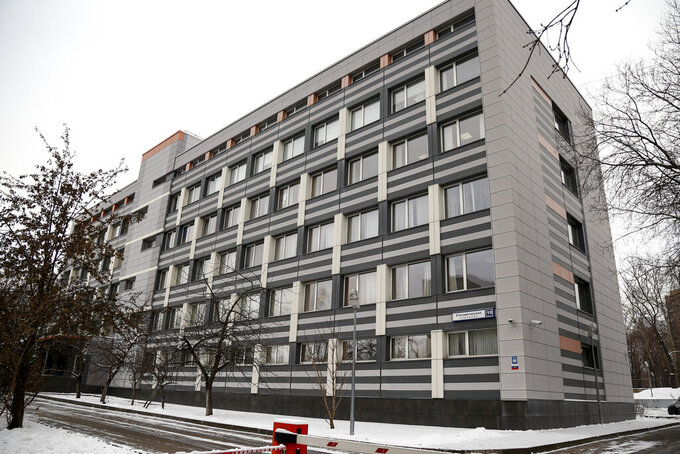 FILE - This Wednesday, Nov. 28, 2018 file photo, shows a view of the building of Russia's national drug-testing laboratory in Moscow, Russia. Another wave of Russian athletes could face new doping charges after the World Anti-Doping Agency said Thursday April 30, 2020, it completed its investigation of a vast trove of evidence. (AP Photo/Alexander Zemlianichenko, File)

ZURICH (AP) — FIFA expects to get evidence from Moscow laboratory data this month that could expose doping by soccer players in Russia.

FIFA said on Tuesday it was among sports governing bodies which received updates last week in a World Anti-Doping Agency video conference call about fresh evidence in the long-running Russian scandal.

WADA is sharing data — of samples tested up to 2015, and tampering that continued into 2019 — retrieved from the Moscow testing lab at the heart of a state-backed doping program.

The anti-doping watchdog said last week its investigations of 298 athletes under suspicion were being handed over to 27 international federations and one events organizer.

“FIFA participated in WADA’s explanatory webinar on April 30 and was informed that they will receive the full case packages by the end of May,” soccer’s world body said.

It is unclear how many soccer cases are among the 298. FIFA and WADA agreed ahead of the 2018 World Cup in Russia that the host nation’s 23-player roster was not implicated in the years-old scandal.

“FIFA works closely with WADA to conclude the investigation as soon as possible,” FIFA said, noting it would prepare potential disciplinary cases “as soon as we receive the full case packages.”

WADA investigators retrieved evidence from the Moscow lab database last year as a key step to resolving a scandal that tainted several Olympic Games, including the 2014 Winter Games in Sochi.

They found data had been manipulated, potentially opening up a fresh wave of disciplinary cases in multiple sports.