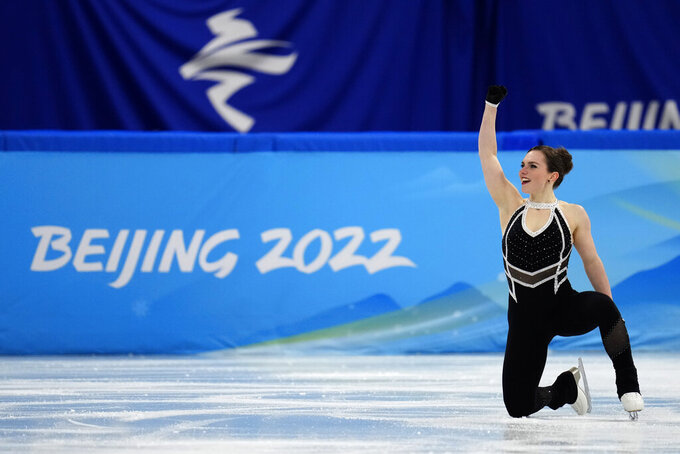 BEIJING (AP) — Some figure skaters are hoping an Olympic doping scandal that is fueling a push to raise the minimum age of competitors will also focus attention on what they see as the sport’s most pressing issue: body image, body shaming and disordered eating.

The sport is under scrutiny after 15-year-old Kamila Valieva of the Russian Olympic Committee tested positive for a banned heart medication, then failed to medal in an event for which she was the overwhelming favorite.

Valieva's ordeal has led some skating officials to propose raising the minimum age for elite figure skating competitions from 15 to 17, ahead of the 2026 Winter Olympics in Italy.

The age question is inseparable from the sport's struggles with eating disorders and body image. Younger, less developed skaters are doing things on the ice that more mature women's bodies can't, notably the quadruple jumps performed in Beijing by Valieva and other teen skaters working with her embattled coach, Eteri Tutberidze.

“We see girls who are really young and thin and who do really well in our sport," said Josefin Taljegård, a 26-year-old Swedish figure skater who competed in the women’s individual event in Beijing. "Maybe that’s why they’re so skinny – because they’re still children.”

That puts pressure on older skaters to keep pace.

“It usually is not like ‘Oh you have to look this kind of way’ but sometimes one can hear 'Oh if you were skinnier, you would jump higher or rotate faster,” Taljegård said.

While the Valieva case has focused the world's attention on doping, skaters say body image issues are far more pervasive in the sport. The 2014 class of Olympic skaters is proof.

Yulia Lipnitskaya was Russia’s golden girl at the Sochi Games when she was 15, before becoming a cautionary tale of chronic anorexia when she retired because of her struggles with the disorder.

American Gracie Gold's well-known story of overcoming anxiety and an eating disorder to continue competing has been an inspiration for many skaters.

U.S. ice dancer Kaitlin Hawayek, 25, said she had an eating disorder for several years. Not enough has been done to educate young skaters to see “their body is great exactly the way it is," she said.

Hawayek feels fortunate to have the support of her coaching staff, nutritionist and trainers on the U.S. team. “I’ve really been able to see a new mindset that has allowed me to embrace my body,” she said.

U.S. figure skater Alysa Liu, who is just 16, said she found a way to cope with negative comments about her body, but it took time for her to truly understand the dynamic she was being caught up in. The American prodigy placed in the top 10 for the women’s individual event this week.

“I dealt with a lot of negativity, like two years ago,” Liu said of the many critics who have commented on her very public growth spurt. “At one point, I was like, why are they literally coming for a 14 year old? That’s so weird. They’re just kind of creepy for that. Why are they looking at a minor’s body that way? It’s just a little weird and kind of wrong, obviously.”

U.S. pairs skater Ashley Cain-Gribble believes a higher age limit would be helpful for the sport she nearly left due to body shaming over her strength and height. The 26-year-old is 5-foot-6, making her significantly taller than many of her peers.

“Give skaters a chance to allow their body to develop naturally,” Cain-Gribble said. “I know that I didn’t really come into my own body until many later years."

Elizabeth Daniels, a psychology professor at the University of Colorado in Colorado Springs who studies body image in sports, is skeptical that an age change alone could address this issue.

The larger cultural problem, Daniels said, is that artistic sports like figure skating, gymnastics and even diving are judged subjectively.

Half of a skating score is based on how judges view the performance — music, costume, flow and the overall feel. A more concise metric could perhaps help change the culture of dieting and diuretics in skating.

“They’re being judged on how they execute a skill, but also how they look while they’re doing it,” Daniels said. “When you have a sport like that, and you are judged in this artistic way, the question becomes ‘Does my body conform?’ That, I think, increases the potential for eating disorders.”

Skater or not, body dissatisfaction can generally be seen in girls as young as 5, peak during adolescence and remain constant throughout a woman's 20s.

Sports like figure skating cater to body types that are small and light yet fit and muscular, said Luke Corey, a sports medicine dietitian at the Mayo Clinic.

Four minutes of intense exertion is extremely difficult for even the best athletes in the world, so it's no surprise that skaters may go to extremes if they think it can help their performance.

“We’re not supposed to see pain and vulnerability and all that, so it’s hard to understand," Corey said. "We want bigger, better but at what cost?”

Valieva’s case shows that the youngest skaters may be especially vulnerable to such pressures from adults pushing a win-at-all-costs approach, Cain-Gribble said. Raising the minimum age would help.

“You need to be at an age where you’re able to make decisions and think on your own and be accountable and be able to know what is right and what is wrong," she said, "and not just be relying on those people that are in charge of you."