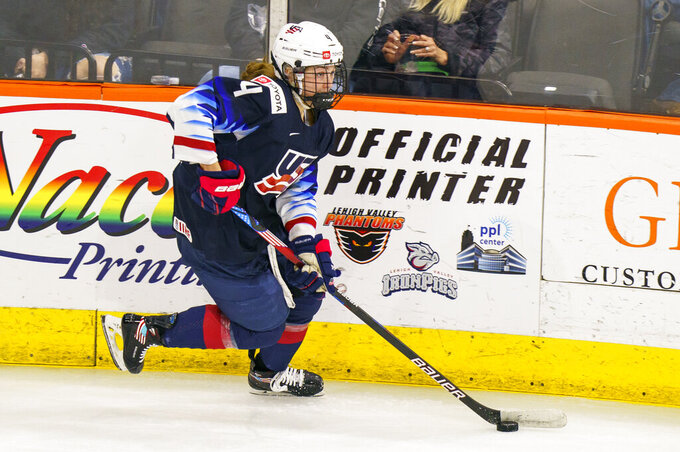 FILE - United States' Caroline Harvey moves the puck during the third period of a women's hockey game against the Canada, Friday, Oct. 22, 2021, in Allentown, Pa. The United States, which opens its Olympic gold-medal winning defense facing Finland, features eight newcomers. It’s a group led by 19-year-old Caroline Harvey, a smooth-skating defender with a heavy shot. In pushing back her freshman season at Wisconsin to next year, Harvey has made a quick ascension after scoring a goal and adding two assists in six games at the world championships in her national team debut.. (AP Photo/Chris Szagola, File)

There was so much buzz revolving around Sarah Fillier’s arrival at Princeton in 2018, women’s hockey coach Cara Morey took a tough-love approach.

Difficult as it was, Morey chose to initially pay little attention to Fillier. Her thinking was to ease the expectations already placed on her star recruit's shoulders, while also allowing the forward a chance to organically find her place on the team.

“So I almost ignored her. That was hard on Sarah,” Morey recalled with a laugh. “But in a way, then the players did accept her for who she was. And they loved her. And that’s when I could start coaching her.”

There’s no ignoring Fillier now in preparing to make her Olympic debut for Canada at the Beijing Olympics.

The 21-year-old made a dazzling world championships debut with her dynamic play-making ability and deft scoring touch leading to three goals and three assists as Canada went 7-0 to win gold and end a five-title run by the U.S. Fillier’s prowess carried over into the pre-Olympic rivalry series against the Americans by scoring a team-leading five goals in six games in which Canada went 4-1-1.

This is the type of production Fillier has been known for since growing up just outside of Toronto, where she was a multi-sport athlete and spent most of her youth playing on hockey teams well above her age group.

“I think she’s going to be the best player in the world, and I think she’s very close to it already,” Morey said of the nation’s 2019 rookie of the year.

Fillier is playing on Canada’s second line alongside veterans Melodie Daoust and Natalie Spooner. The trio complements each other with Spooner’s big-bodied ability to retrieve pucks, Daoust’s passing skills and Fillier’s finish.

“From that first time getting to play with her, I knew she was going to be a great player,” Spooner said. “And once she gets used to playing at this level even more, it’s going to be crazy.”

Captain Marie-Philip Poulin cites Fillier for her commitment to improve.

“She wants more every day, and at a young age, you can’t be satisfied where you’re at. And I don’t think she is,” Poulin said. “That’s something that struck me a lot, inspired me.”

Canada coach Troy Ryan also coached Fillier on Canada’s under-18 team, with whom she had 15 points, including eight goals, in 19 games. He calls her special.

“It’s not easy being touted as one of the next great ones, and at first, she was a little bit shy,” Ryan said. “But as she gained some confidence this year, and I think the pandemic and spending a lot of time together allowed her to settle in a bit more, she’s just now thriving.”

Fillier credits her veteran teammates for accepting her, and allowing her room to grow and gain confidence.

“It’s exciting to compete with and against your idols and people you’ve looked up to for years, and know you’re in the same level as people you aspire to be is definitely cool,” she said. “They want us to be a piece of the puzzle and to make a difference.”

Fillier is the team's youngest player, and one of seven skaters making their Olympic debuts for Canada, which opens preliminary round play against Switzerland on Feb. 3.

In pushing back her freshman season at Wisconsin to next year, Harvey has made a quick ascension after scoring a goal and adding two assists in six games at the world championships in her national team debut.

“One of my favorite stories is we had a scrimmage, and she was in the penalty box talking to one of our staff members, and said, `Well, watch this. I’m going to go out there and score a goal,’” said U.S. women’s GM Katie Million. “And doesn’t she two seconds later score that goal. Says she’s going to do it and goes out and does it.”

Harvey doesn't recall the moment, while acknowledging her drive to succeed.

“If something happens, it’s like a switch flips,” said Harvey, one of the last players invited to the national camp. “I love the challenge and I was like I want to be a part of this.”

“She’s one of the most mobile defensemen we have. Phenomenal skater,” Decker said. “If you watch her games, you’re not going to think that she’s 19 years old and a rookie defenseman for us.”

Other newcomers to the U.S. roster include forwards Grace Zumwinkle and Abbey Murphey, and defender Jincy Dunne.

Thompson recalled how shy Fillier was upon arriving on campus before making an immediate impact on a team which won its second Ivy League title in 12 years, and earned its third NCAA Tournament berth in school history.

Little has changed since, except for Fillier displaying a playful personality, a reflection of how much her confidence has grown.

“What she was able to do at the college level translated to still be able to do that at the senior level has been incredible to watch,” Thompson said.